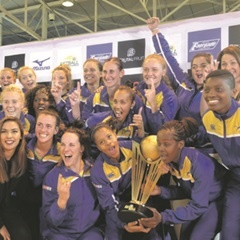 AT LONG LAST: The Gauteng Jaguars celebrate their deserved league victory after beating the North West Flames in the finals. (Silver Sibiya)

Johannesburg - With the Brutal Fruit Netball Premier League, the biggest female sporting event in the country, ending in a dramatic way last Sunday, Silver Sibiya looks at the highlights and lowlights of the season.

The eight weeks of non-stop netball, which started on April 21 in Durban, came to an end when the Gauteng Jaguars finally clinched the Brutal Fruit Netball Premier League (BFNPL) title, beating the North West Flames 49-43 in Bloemfontein.

It was the first time a team other than the Free State Crinums lifted the prestigious trophy since the tournament started in 2014.

It was the Jaguars’ fourth consecutive final in the BFNPL, with the team having failed to win against the Crinums for the past three seasons.

“Part of me just wishes we could have played the Crinums, who beat us in three successive finals,” said Jaguars coach Jenny van Dyk in a post-match interview following their win against the Southern Stings in the semifinals.

“The Crinums didn’t make it to the final, but their past success made the people of the Free State come out in numbers to watch the final,” she said.

Mthethwa said local netball was growing, which was evidenced by the fact that support was increasing in provinces across the country.

“We get new fans who have never been to netball games before, and when we talk to them, they confirm that they come in numbers because it is a family sport,” said Mthethwa.

Each province was represented by one team – except Gauteng, which had two.

“A highlight for this year’s league was getting a new winner,” Mthethwa said. “It was long overdue.”

She said another highlight was SA Breweries coming on board to fund the hiring of 10 full-time coaches and the weekly payment of players’ salaries.

“We have also secured 22 bursaries that will be given to players. This will help us balance players’ lives, not only in sport but academically.”

The NSA opted to send the BFNPL champions to New Zealand, instead of the national team, as a first prize.

Mthethwa said this would help give the players experience in playing against some of the best teams in the sport. They depart on June 29.

The NSA has in the past expressed a wish for BFNPL teams to have second-tier teams.

The Jaguars have started on a programme and have already identified players who have been promoted to the first team.

“When the league started in 2014, our main objective was to have a professional league. We hope to achieve that within the next 10 years,” said Mthethwa.

Spar Proteas coach Norma Plummer named a squad of 26 players for the national squad training camp, which will be held in Pretoria next month.

Only four members of the squad – Lenize Potgieter, Bongiwe Msomi, Erin Burger and Karla Mostert – do not play in the BFNPL.

Potgieter plays in New Zealand, Msomi in the UK, and Burger and Mostert ply their trade in Australia.

The team will play in the Quad Series, which begins in August.

“We want to have a look at the top players ahead of an international season that includes the Quad Series, the Diamond Challenge and two tests against Fiji,” said Plummer.