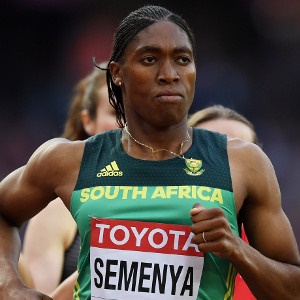 Monaco - South Africa's Caster Semenya has, over the years, learnt how to deal with those who question her success.

Ever since 2009, when the IAAF ordered that Semenya undergo a gender verification test, Semenya has been at the centre of debates surrounding gender testing and testosterone levels in women’s sport.

While she has received abundant support from back home, there has also been a vocal corner of the sporting community that has constantly questioned the fairness of Semenya competing against her rivals in women's running.

On Tuesday night, Semenya will irk those critics even further when she is announced as a nominee in the Sportswoman of the Year award at the 2018 Laureus World Sports Awards in Monaco.

Whether she wins or not is unimportant to Semenya, but what is relevant is the fact that she has been identified and honoured as one of the most dominant sportswomen on the planet.

The 27-year old has come a long way since her career was temporarily put on ice by the IAAF in 2009, and along the way she has developed a thick skin and positive approach to the inevitable controversy that has followed her.

Semenya, simply, wants to run races and win medals, and she doesn't have much time to think about anything else.

"I’m a human and there are emotions, but I studied psychology and sports physiology. I know how to treat my emotions," she said from Monaco on Tuesday, hours before the Awards.

"There are people who will undermine and judge, but I cannot take it in mind. My main focus is to become a great athlete. I want to be a good example to the kids and whatever people say, it’s their opinion and not mine.

"When I look back I want to see that I’ve ploughed back. There are kids who look up to me and I need to set up a good example."

When met by detractors, Semenya's approach is a simple one.

"If you come and you try to distract me, I have to find a way to get back onto the right track. If somebody tried to come with negativity, you need to change it into a positive," she said.

"I know that sport is not personal and emotions can never help you win.

"I believe that I’ve been sent here for a reason, and I’ll never let people jeopardise that."

Semenya is the only African nominated at the Laureus Awards, which get underway at 20:00 (SA time).

We live in a world where facts and fiction get blurred
In times of uncertainty you need journalism you can trust. For only R75 per month, you have access to a world of in-depth analyses, investigative journalism, top opinions and a range of features. Journalism strengthens democracy. Invest in the future today.
Subscribe to News24
Related Links
Caster overwhelmed by Laureus honour
Laureus Awards to Cape Town has challenges
Moses: Caster treated 'atrociously' by IAAF
Next on Sport24
Proteas win again in Tri Nation netball series