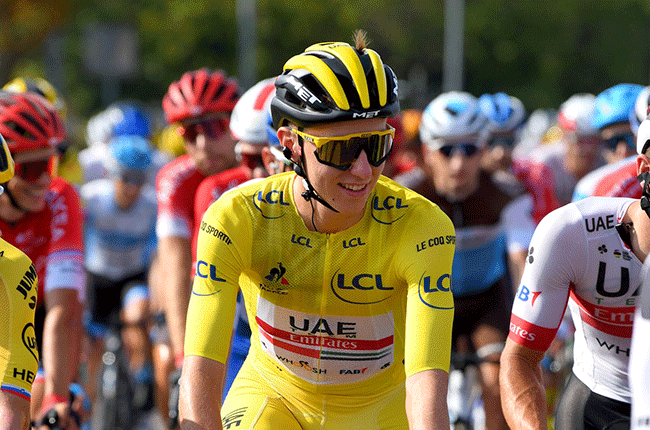 This year's worlds have been shortened to four races from Thursday to Sunday and moved from Switzerland to Imola in Italy because of local Covid-19 restrictions.

UAE Team Emirates' Pogacar, who became the Tour's youngest champion since 1904 aged 21, will be joined by the man he pipped to the yellow jersey Primoz Roglic in Slovenia colours for Sunday's 258.2km race which starts and ends on the Enzo e Dino Ferrari automobile circuit.

"Now that I won Tour de France, for sure I need to find new goals," Pogacar said after last weekend's win in the French capital.

"I will try to defend my Tour de France title but next is the World Championships, so this is my goal in the coming days.

"In the future, I just want to be at my best and try to win again," he added.

Two members of the Arkea-Samic team have been targeted in a doping investigation since the end of the Grand Boucle but rider Nairo Quintana is set to feature for Colombia this weekend.

Thomas will be making his first appearances at the event and expects plenty of competition over the relatively flat 31.7km run.

"I'd like to think I'll be fighting for a medal. I've never ridden a worlds time trial," he told his Watts Occuring podcast.

"I think Filippo Gana. He's going really well. But Wout Van Aert, he's got to be up there. He's not slowing down. Tom Dumoulin, I think he'll be up there fighting for medals.

"It's really short for worlds, and it's not too lumpy either, it's only around 200 metres of climbing. It's right up Gana's street. I'm looking forward to it," he added.

On Thursday the USA's Chloe Dygert defends her women's title against the clock in her first race since winning the rainbow jersey in Yorkshire last September.

We live in a world where facts and fiction get blurred
In times of uncertainty you need journalism you can trust. For only R75 per month, you have access to a world of in-depth analyses, investigative journalism, top opinions and a range of features. Journalism strengthens democracy. Invest in the future today.
Subscribe to News24
Related Links
'Nothing to hide' - Tour de France team leader Nairo Quintana denies doping
Pogacar slays Jumbo's Goliath to rise above the Tour doubters
Two in custody in Tour de France doping probe
Next on Sport24
Anti-doping raid will prove our innocence, says TDF stage winner

Choose your newsletters
Voting Booth
Having lost the first Test against the British & Irish Lions, can the Springboks recover to win the series?
Please select an option Oops! Something went wrong, please try again later.
Yes, they will win the series 2-1. Go Bokke!
58% - 4214 votes
The Boks will win a Test, but will lose the series 2-1.
26% - 1868 votes
It's not looking good. A 3-0 whitewash is on the cards.
16% - 1170 votes
Previous Results
Tokyo Olympics
Shot putter Kyle Blignaut makes SA history: 'Hopefully, I can do us proud'