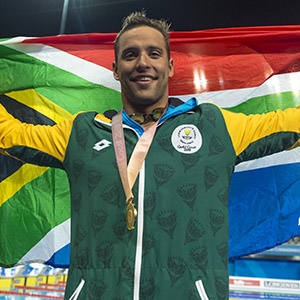 Cape Town - In an exclusive interview, CHAD LE CLOS talks about relocating to Cape Town, why he hopes Michael Phelps will make another competitive comeback and his aims for the 2020 Olympics.

Sport24 asked: How have you settled in Cape Town since moving from Durban?

Chad le Clos: I’m loving it. Cape Town is my new home and favourite city. Ever since 2012, I had been coming to Cape Town on holiday over December with my mates. I fell in love with the place and it was always the plan to the move to the Mother City after the 2016 Rio Olympics. Having lived in Durban for so many years, I wanted a change. Staying in Cape Town has given me a better lifestyle, for sure. It boasts beautiful beaches, mountains and pretty girls. In terms of my training, the move with Italian coach Andrea di Nino has been really positive and it’s a much more professional set-up. (When based in Cape Town, Le Clos trains at the Jan van Riebeeck High School swimming pool). The most important thing is that I’m confident and happy in the work that I’m doing. You have to enjoy the sport you pursue. I went through a very lonely patch a couple years ago when I wasn’t enjoying it as much. I don’t want other swimmers to experience what I went through. It’s a phenomenon known as post-Olympic depression - once you achieve a certain high; it’s hard to replicate the same rush you get when you win gold. I want swimmers to swim for as long as they want to and ultimately retire on their own terms... I also launched the first branch of the Chad Le Clos Academy in April. I really want to see the growth of swimming as a sport, both in South Africa and across the world, by helping existing swimmers improve and encouraging beginners to learn the sport and develop life skills. An academy has been a dream of mine for some time and I hope it will prove a long and productive journey. Launching my academy was a dream come true and a huge day, not only for swimming but, for South African sport.

Sport24 asked: How does it feel to be South Africa's most decorated swimmer?

Chad le Clos: Unbelievable! Eight years ago, I travelled to the Commonwealth Games for the first time. I was in Matric and won double gold. It’s just crazy to think that in 2018, I would have 17 Commonwealth Games medals. I’m very thankful to everyone and grateful for the opportunities I’ve been afforded. I have to say a big thanks to my team, coach, sponsors and of course my family, who play a big role. My parents, Bert and Geraldine, are the ones who woke up at 04:30 to take me to training. They have guided me and helped me make the right decisions from when I was young. Without them, I wouldn’t be half the man I am today. Dealing with my parents’ illnesses was difficult for me and, at one stage, it was touch-and-go with my mom’s cancer. Life throws you curveballs that you can’t prepare for. No one can prepare for what I went through in 2016. Thankfully we came out on the other side unscathed. It put everything into perspective.  Someone asked me: ‘Would you rather have your parents pass away or win gold medals and break records?’ And, without blinking, I said: “You can have all the gold medals and records in return for their health.” Many things I worried about in the past don’t matter anymore. As you get older, you see how life changes.

Sport24 asked: Would you like to race against Michael Phelps one more time?

Chad le Clos: I would love to race against Michael again. I beat him in London, he beat me in Rio and we also dead-heated, so the records show its one-and-a-half each. Even if our rematches are not at the Olympic Games, maybe we can arrange home and away races in South Africa and the United States... The American media created the supposed beef between myself and Michael. They said I told him to “shut up” and that I was “the greatest”. I never said that stuff. Michael said that swimming had become slower since he retired. However, I had just clocked a time he hadn’t done for a while and won gold at the World Championships in Russia. Coming from the greatest of all time, I thought he shouldn’t have said it because we were all trying our best in our own right. You can only hope that Michael will make another comeback. If he had beef with me, it was on the battle field. I think that it is important to show respect and humbly accept defeat. I lost to Michael in Rio and I took it like a man. I shook his hand and said: “Congrats, come back and give me one more chance.”

Chad le Clos: One day, I want swimmers to say that the Chad Le Clos Academy helped them get to the Olympics and achieve their dreams. That is honestly a huge goal of mine. I’m very blessed to have the opportunity to give back to the people who have given me so much. At the end of the day, without my fans in South Africa and around the world, I’m a nobody right? I’m very grateful for all the support I receive and want to try make a difference in South Africa. With the utmost of respect, we are lacking in the facilities and the knowledge and understanding of swimming in this country. I’m not knocking any coaches because I became a home-grown Olympic champion. However, in order to develop the next generation of champions, you cannot have 10, 11 or 12-year-olds swimming 60 to 70 kilometres, like I do at the moment (The lap-training approach isn’t seen as being sustainable). To offer an analogy, you wouldn’t ask your 12-year-old son to tackle Bismarck du Plessis. Due to the fact that swimming is not an impact sport, over-training can take place and the fun element can be forgotten. I want to create a legacy in the world of swimming and use my name to build a better future for swimmers. Starting from the grassroots level is most important because the bottom line is that no one is born an Olympic champion. I also want to work with underprivileged communities and tap into unseen talent in South Africa.

Sport24 asked: What is your outlook ahead of the Tokyo Olympics in 2020?

Chad le Clos: I’m looking forward to competing in Tokyo two years from now. The Japanese are respectful people, everything runs on time and I won’t really experience the air pollution as my events are indoors... My biggest attribute is my mind and my will-power to be the best that I can be. I stand for being the truest version of myself. For me, it’s all about being a positive role model and I see it as my duty to act appropriately both in and outside the pool. If you were to ask me if I will win gold at the Tokyo Olympics, I would say 100 percent because I see myself as the most competitive person out there. Maybe I won’t win but, at the end of the day, you must have the mindset that you can achieve your goals otherwise you won’t succeed. I am not focused on my opponents and it doesn’t bother me that I’m not the favourite for Tokyo. In two years’ time, I feel like I will be in my prime at the age of 28.

Chad le Clos: I would invite Cristiano Ronaldo, Nelson Mandela and Muhammad Ali. I love winners and Ronaldo is one (He has signed a four-year contract with Juventus after ending a nine-year stay at Real Madrid). I like his mentality and, every time I race, I believe I will win. Mandela was massive for the youth of this country and fought for equal rights. In terms of Ali, I am inspired by positive people and what he did outside of the ring was courageous. My dad, Bert, would also come around for the dinner party. He is a beast in the kitchen and his speciality is chicken curry. He grew up in Mauritius and cooks really delicious creole dishes.

Rohan Janse van Rensburg
We live in a world where facts and fiction get blurred
In times of uncertainty you need journalism you can trust. For only R75 per month, you have access to a world of in-depth analyses, investigative journalism, top opinions and a range of features. Journalism strengthens democracy. Invest in the future today.
Subscribe to News24
Related Links
A look inside Cameron's Big, Fat, Greek wedding
Cameron van der Burgh ties the knot!
Le Clos launches academy in Cape Town
Next on Sport24
Coetzé, Sates keep SA flag flying high in Doha