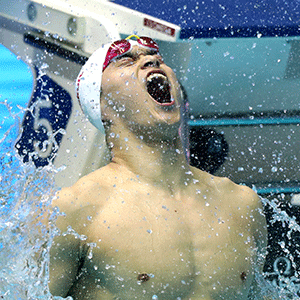 Australia's Mack Horton snubbed Sun on the podium at the world championships in South Korea, in protest at a drug-testing incident involving the triple Olympic champion where vials of blood were smashed with a hammer.

Xinhua, the Chinese news agency, did not hold back in its criticism after it transpired that Horton's team-mate Jack, 20, tested positive for Ligandrol, which helps build muscle mass.

"By lying to the public regarding the Jack case, Swimming Australia has lost every ounce of credibility in its defence of Mack Horton's podium stunt aimed at Sun Yang," the commentary said.

Horton received an ovation from fellow swimmers at the athletes' dining hall for his protest, which was echoed by Britain's Duncan Scott. Sun, who served a suspension in 2014, has always denied doping.

Xinhua accused Horton, 23, of "selective outrage" and being an "opportunist", intent only on getting one over an opponent.

"He should stop pretending that protecting clean sport is his intention. Horton is fooling nobody," Xinhua said.

Many similar opinions were voiced on Chinese social media.

"Those who call others liars are in truth the liars themselves," was one typical post on the Twitter-like Weibo.

Sun was cleared by swimming's governing body FINA to compete in South Korea despite the murky case last year of the smashed vials.

FINA agreed with Sun that testers had failed to produce adequate identification or follow correct protocol. However, the World Anti-Doping Agency has since taken the case to the Court of Arbitration for Sport.

We live in a world where facts and fiction get blurred
In times of uncertainty you need journalism you can trust. For only R75 per month, you have access to a world of in-depth analyses, investigative journalism, top opinions and a range of features. Journalism strengthens democracy. Invest in the future today.
Subscribe to News24
Related Links
Drug-tainted Aussie swimmer facing 4-year ban - report
Bad week for Phelps: Highs and lows of world championships
Coach insists 'devastated' drug-row Aussie swimmer is innocent
Next on Sport24
Schoenmaker swims yet another Olympic qualifying time at SA Aquatic Championships