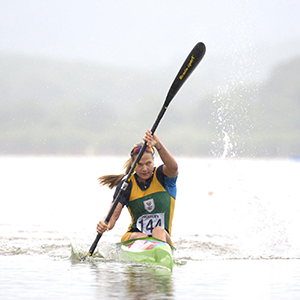 Durban - Bridgitte Hartley starred for the South African team of sprint canoeists with a stunning bronze medal-winning performance in the 1000m K1 A final at the ICF World Championships in the Portuguese town of Montemor O Velho.

She started the non-Olympic event typically slowly but then ground her way through the field and finished the race closing in fast on a flagging Hungarian Dora Bodonyi who took the gold, and second-placed British paddler Lizzie Broughton.

Hartley, who has been more focussed on her marathon training than sprinting, was thrilled with per performance.

"Oh my gosh, I can't believe it," she gushed. "That was one of my best comeback races of all time!

"I was coming up to the 500 metre mark feeling a bit doubtful. The British girl picked it up at the end and I expected her to die slightly, but she just didn't die!

"I kept trying and trying and then I just figured, I have nothing left but I have to race her to the line, and we took the German girl out and got onto the podium!"

"It’s so exciting to be back on the world stage," she gushed.

"This is important as it shows us and the athletes how much needs to be achieved over next twelve month before Olympic qualifying in Szeged .

"In the individual events our senior paddlers Bridgitte Hartley, Esti van Tonder and Chrisjan Coetzee had a all making it into their semi-finals and finals.

"The new crew boats also are showing promise with the K2 200m crew of Nick Weeks and David Rodrigues standing out on the first day, just falling short of making the A final.

"We can definitely build and improve from this for 2018, looking at the potential of our paddlers and hard work that they put into their training and racing," said Rodrigues.

"It was a great learning experience for us, and we are excited to come so close to making the A final in our first world championship," said Weeks.

Cameron Hudson and Hamish Lovemore took their first major step into international sprinting, racing the 1000m K2 event against some of the very best crews in the world. While they failed to advance beyond the semi-final, they raced impressively.

"We had some nerves at the star and didn't really know what to expect!" said Hudson. "The pace of the racing was insane." he said.

Esti Van Tonder showed great composure from her years as a dedicated sprinter, and took Kayla de Beer under wing at her first world championships, pairing for a number of the K2 races.

"I am really proud of how Kayla (de Beer) handled the pressure at her first senior worlds," said Van Tonder.

"I look forward to working with and alongside her in the future," she added.

Day One and Day Two