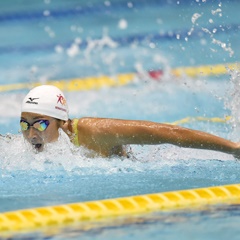 Tokyo - Japanese swim queen Rikako Ikee, the poster girl for next year's Tokyo Olympics, has been diagnosed with leukaemia, the 18-year-old tweeted on Tuesday.

In a shock announcement, Ikee said:"After feeling unwell I returned in haste from Australia and following tests I was diagnosed with leukaemia. I still can't believe it myself, I'm in a state of confusion."

Ikee shot to fame at last year's Asian Games, where she captured a record six gold medals to fire a warning for the 2020 Olympics in her home city.

The teenage superstar, who holds a string of national records, has been tipped to push for gold on several fronts, in particular in the women's 100 metres butterfly.

Ikee told fans she was determined to beat her illness after being forced to abandon her training camp on Australia's Gold Coast.

"If treated properly it's a disease that can be beaten," said Ikee, who confirmed she will withdraw from the Japanese championships in April.

"I will devote myself to my treatment and strive to be able to show an even stronger Rikako Ikee."

Ikee's coach Jiro Miki confessed he had never seen the swimmer struggle as much as she had while training in Australia.

"I had never seen her breathing as heavily as that," he said.

"We took her to a local hospital to check her blood and heart but decided to return to Japan as quickly as possible to undergo further tests. But as for her motivation to beat this disease, I can only bow my head at her determination."

Miki revealed that Ikee has been admitted to hospital to begin treatment.

"She is not moping about," he added.

"She is absolutely positive about beating this as quickly as possible."

Ikee stole the headlines from giant Chinese swimmer Sun Yang at the Asian Games in Jakarta as she finished with eight medals in total, a haul previously achieved only by North Korean shooter So Gin-man in 1982.

Japan's new swimming pin-up would have gone into this year's world championships in South Korea as a strong favourite in the 100m butterfly, while also a threat in the 200m freestyle.

After her breakout performance in Jakarta, Ikee told AFP that she welcomed the pressure to produce at the Tokyo Olympics.

"Pressure for me is something I thrive on," she said.

"There will be a lot of Japanese fans cheering for me at the Tokyo Olympics in my home city - maybe even some from overseas too - and that's going to give me great strength.

"The more fans that come, the stronger I'll be," added Ikee.

"When it comes to swimming, I just really hate to lose."

"I could never imagine Ikee could suffer an illness like this," said Japan Swimming Federation vice-president Koji Ueno, noting that doctors believe they detected the disease in its early stages.

"It's just so very hard to comprehend. It is a severe diagnosis and a tough road back but we would ask everyone for their warm prayers to help her make a full recovery. We want to do everything we can to allow her to compete at the Tokyo Olympics."

We live in a world where facts and fiction get blurred
In times of uncertainty you need journalism you can trust. For only R75 per month, you have access to a world of in-depth analyses, investigative journalism, top opinions and a range of features. Journalism strengthens democracy. Invest in the future today.
Subscribe to News24
Related Links
Australians walk away with Midmar Mile honours
Swim star Sun Yang threatens legal action over doping report
Olympic champion Adrian has testicular cancer
Next on Sport24
World Surf League calls up SA's Matthew McGillivray to start 2022 Championship Tour