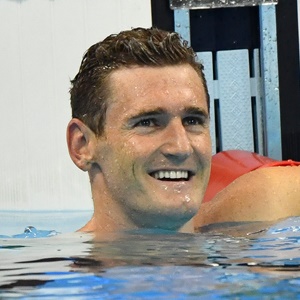 Van der Burgh previously hinted that he would retire after the 2020 Olympic Games in Japan.

However, the 30-year-old - who now resides in London - has decided to call time on his illustrious career.

The South African has an impressive swimming resume, with a gold and silver medal from the 2012 London and 2016 Rio Olympics, respectively, as well as four Commonwealth Games gold medals, two silvers and three bronze medals.

Van der Burgh will swim his final race, starting with Saturday's heats for the men's 50m breaststroke in China.

Have an amazing retirement @cameronvdburgh An absolute honour to race you these past 4 years! You inspired me into my first olympics after watching you do it in 2012 and pushed me further than anyone else could! Enjoy London! ??????

??WORLD CHAMPION! ?? I couldn't of written a better ending for my last 100 meter race. Looking forward to closing out my career with some fun in the 50m! ??????

.@Cameronvdburgh retires from swimming on top after winning another world title taking his total to 5 gold, 1 Olympic Gold and 9 World Records! More than that he always stayed a true gentlemen and outstanding ambassador for South Africa and the sport of swimming. ????????????

Thanks for all Cameron van der Burgh I’m feeling realized to have meet you brother! See you around! https://t.co/z3voqxD1SJ

Congratulations on an incredible career @Cameronvdburgh been a privilege to watch you grow and compete. Wishing you all that is good in your future endeavors

South African star @Cameronvdburgh ???? has announced his retirement from swimming at the end of the 14th FINA World Swimming Championships (25m).

Thank you, Cameron, we will miss you! ?? pic.twitter.com/wozJGZZ4qh

Congrats to @Cameronvdburgh on an incredible career!! Have enjoyed following your achievements both in the pool and out! South African & world sport is better because of you!! #legend

Dear @Cameronvdburgh from the bottom of my heart... Thank You... for all the Sacrifices and Hardship you endured..and The wonderful moments raising the Team SA flag... Good luck with your future endeavours..This South African is Greatful and Proud of you ?????????????????

Absolute legend, well done brother and all the best with the next adventure ?? @Cameronvdburgh

I can only thank Cameron,he made us proud,is a "Sport Ambassador" - I can only hope that he will assist to develop new talent and continue to make us as South Africans proud. https://t.co/Fhhj4Wl8DT