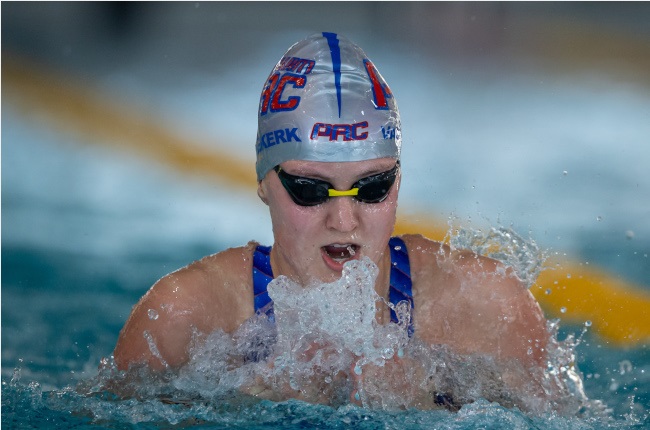 Lara van Niekerk emerged as the star on day two of the SA Short Course Championships in Pietermaritzburg.

The 18-year-old broke Olympic champion Tatjana Schoenmaker’s South African record in the heats of the 50m breaststroke and then went even faster in the final.

In the morning session, Van Niekerk touched the wall in 30.06 seconds to not only better the SA mark but also the African record set by Kenya’s Achieng Ajulu-Bushell in 2009 and then swam a blistering 29.85 in the final to shatter her own record. That also saw the Pretoria swimmer achieving the A qualifying time for the World Short Course Championships in Abu Dhabi this December. Caitlin de Lange finished second in a B qualifying time of 31.23.

“We were just trying to break the 30-second barrier but I didn’t expect to break it by this much so I’m very surprised and super-happy,” said Van Niekerk afterwards.

Speaking about the inspiration Schoenmaker has been with her world record-breaking exploits in Tokyo, Van Niekerk said: “She’s such a big role model of mine. I’ve looked up to her since I was small, always swimming against her. I’ve always wanted to be like her, she’s just amazing.

Rebecca Meder was also in record-breaking form in the evening session. The 19-year-old claimed back the SA record from rival Aimee Canny in the 100m individual medley, winning in a time of 1:00.00.

“It’s quite a funny story, Aimee and I swam last year and we both went under the South African record but she won so she claimed it, so I was really trying to get it back,” said Meder. “I’m stoked for that but I was eyeing out a 59.7, which is Kirsty Coventry’s African record, but it was a massive PB for me – almost half a second on a 100m which is amazing.”

Second placed Van Niekerk (1:01.84) who was back in the pool after her breaststroke record, third-placed Emily Visagie (1:03.04) and fourth-placed Caitlin de Lange (1:03.31) all finished with B qualifying times.

Meder had earlier also achieved a B qualifying time in the 200m freestyle, taking the title in 1:58.07.

Meanwhile Matt Sates’s quest for 12 gold medals at the event, hit a bit of a hiccup after a disqualification in the 100m individual medley heats.

He did secure his second gold of the event in the 200m freestyle though, taking victory in 1:42.91, an A qualifying time for the World Championships.

Guy Brooks finished second with a B qualifying time of 1:45.73.

17-year-old Olympian Pieter Coetzé made the most of Sates’s absence, claiming the 100IM title in 53.50 to add to the 100m backstroke crown he claimed earlier in the evening in 50.98 seconds. Both times were below the world championship A qualifying time.

“Short course is all about underwaters, especially in the backstroke so I was just trying to utilise that, and it all came together pretty nicely,” said Coetzé.

Asked who his biggest rival at the championships is, he added: “100 percent Matthew Sates. I like going back and forth with him… it’s good competitiveness and I’m excited to see how the rest of the gala plays out.”

Earlier, Dakota Tucker produced a B qualifying time in the 200m butterfly, winning in a time of 2:12.55, while Ross Hartigan did the same in the men’s event, taking the title in 1:58.06.

We live in a world where facts and fiction get blurred
In times of uncertainty you need journalism you can trust. For 14 free days, you can have access to a world of in-depth analyses, investigative journalism, top opinions and a range of features. Journalism strengthens democracy. Invest in the future today. Thereafter you will be billed R75 per month. You can cancel anytime and if you cancel within 14 days you won't be billed.
Subscribe to News24
Next on Sport
SA sailing skipper Sizatu seeks win for diversity in race to Brazil