Lions would've won if it was football - Mehrtens 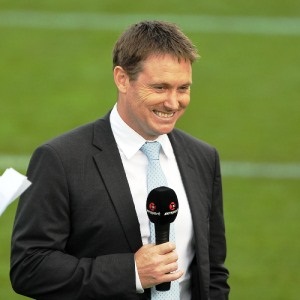 London - The British and Irish Lions would be heading for the second Test in Wellington next Saturday 1-0 up in the series with world champions New Zealand if they had been playing football, according to All Blacks great Andrew Mehrtens.

The South Africa-born 44-year-old - capped 70-times and a member of the side that lost the 1995 World Cup to the Springboks - wrote in Monday's edition of 'The Times' that the Lions lost 30-15 in the opener in Auckland because the All Blacks possess superior handling skills.

Whilst Mehrtens believes the series is not beyond redemption for the Lions, both his fellow former All Black playmaker Nick Evans and blunt combative ex-England hooker Brian Moore are less optimistic about Warren Gatland's chances of levelling the series and keeping it alive.

Other commentators in the British media, notably former England flyhalf Stuart Barnes, remarked that defeat for the Lions to the Hurricanes on Tuesday will ruin Gatland's reputation.

Mehrtens, who was a pivotal member of the Crusaders side that won four Super 12 titles in five years at the turn of the century, said drily both sides should warm-up for the second Test with a football match so the Lions could gain a morale-boosting victory based on his experience with English side Harlequins.

"The basic skills that kids are learning in primary schools in Britain and Ireland are more likely to be football skills, like Argentinians or Brazilians," wrote Mehrtens.

"Most English kids know how to trap a football or flick it on. I had to play catch-up."

Mehrtens, though, says the hard fact of the matter for the Lions is it is not all about using your feet in rugby as the All Blacks showed.

"There are many reasons why the All Blacks won on Saturday, but one of them is that they just seem to have superior handling skills," he wrote.

Mehrtens says though the All Blacks won't be sitting back and assuming the second Test is theirs on a platter.

"I think the Lions showed enough to have some confidence to build on, I really do," said Mehrtens.

"If the Lions tighten up on a few things, then they have a shot.

"I can guarantee that the All Blacks won't be sitting down saying, 'It's a foregone conclusion'."

Evans, capped 16 times and who like Mehrtens moved to England to play for Harlequins, doesn't harbour many hopes for the Lions in Wellington.

"The biggest problem for the British & Irish Lions is that the All Blacks are only going to get better in Wellington," the 36-year-old wrote in The Guardian.

"New Zealand were not at their best on Saturday. They made uncharacteristic mistakes and they will improve."

Moore, who has only recently returned to his media duties after suffering a heart attack in April, said the scoreline was right and the most disappointing side to the defeat was not matching the hosts physically.

"Of all the things arising out of the loss, the physical element is the most disappointing and is the first thing the Lions must rectify," wrote the 55-year-old in the Daily Telegraph.

"The Lions team of 1993 squared their series by winning the physical confrontation - nothing less from these Lions will do."

Barnes for his part says a loss to the Hurricanes will leave Gatland scrambling to preserve his legacy.

"Another loss will leave the Lions needing a Test victory if the manager's legacy is to be anything other than the man who lost more games than he won. That would be harsh, but history is brutal," wrote Barnes.