3 things we learned from France's win over Italy 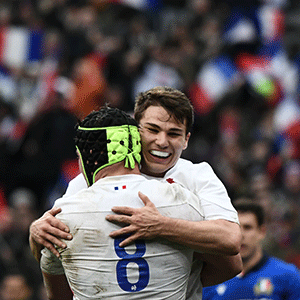 Paris - France remain unbeaten in the Six Nations after following up on their defeat of England with a 35-22 victory over Italy on Sunday.

France enjoyed a 23-10 half-time lead with three tries through Teddy Thomas, Charles Ollivon and Gregory Alldritt, while Romain Ntamack chipped in five points with the boot, outpointing one try from Italy's Matteo Minozzi, Tommaso Allan hitting the extras and a penalty.

The second-half saw France cross for two more tries from Ntamack and Baptiste Serin, matched by a brace for Italy by Federico Zani and Mattia Bellini.

The victory saw France go top of the Six Nations table, with their next game away against Wales. Italy will host Scotland, also winless in their two opening games, on the same weekend.

It might not have been the ideal kicking day for Romain Ntamack, missing three conversions and a penalty as the Stade de France was hit by squall-like wind and rain.

But the son of former France back Emile, an iconic figure of the best of the French flair rugby of the 1980s, was in pugnacious form, ball in hand and out-of-hand kicking.

The Toulouse playmaker got his personal rewards when he ran in France's fourth try for the winning bonus point, showing a clean pair of heels to the Italian defence on a run-around.

It helped Ntamack that his halfback partner Antoine Dupont provided him with a near-perfect service.

The club teammates are combining with success on the international stage and their alacrity in thinking can only be a boost for Les Bleus.

Gregory Alldritt put in another brave shift at the heart of the French backrow that was pushed all the way by the foreign-born Italians.

Having complemented captain Charles Ollivon and blindside flanker Francois Cros superbly against England, Alldritt was conspicuous by his ball-carrying presence around the park against Italy.

The 22-year-old La Rochelle player, born in Toulouse to a Scottish father and French mother, has been an ever-present for France since his debut in last season's Six Nations.

He kept his position magnificently on the wing to take Dupont's fine, long misspass to cross for France's third try.

But importantly, he made 14 tackles, a game-leading 21 carries for 83 metres, two clean breaks and two turnovers, some stats for a player who will no doubt be at the heart of the France team as they head to the 2023 World Cup on home soil.

The defeat was Italy's 24th straight loss in the Six Nations, a record stretching back to a 22-19 win over Scotland in 2015.

New interim coach Franco Smith has adopted the managerial speak of an Italy side rebuilding.

Conor O'Shea had promised so much at the start of his reign in 2016, with a first-ever Italian win over South Africa.

But that was followed by a string of heavy defeats and Six Nations woe along with losses to Tonga and Fiji.

After an opening 42-0 defeat by Wales, Smith has a real task on his hands to galvanise a nation with such a small playing pool and who have enjoyed so little success in the Six Nations.