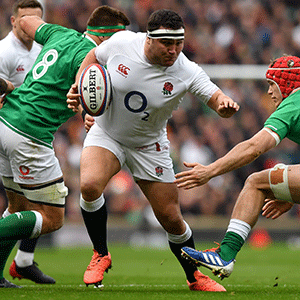 England hooker Jamie George said his side were "preparing for a proper battle" with "strongest rivals" Wales in their Six Nations clash at Twickenham on Saturday despite the reigning Grand Slam champions' recent struggles.

Wales go into the match on the back of defeats by Ireland and France but George said: "You can't take away the edge that this fixture brings.

"I'd say it's our strongest rivalry historically. If you look back at the big games throughout my career they're the ones we get most excited about."

Wales came from 10-3 down at half-time to beat England 21-13 last year and George, a British and Irish Lions front row, said: "There's a different edge to it. The Welsh fans when you play in Cardiff make it pretty hostile, so we're looking forward to welcoming them to Twickenham and want to make it as tough for them as we possibly can.

"We're aware Wales are coming in off the back of two losses and will be hungry as ever to get that victory. They'll be as physical as anything so we're preparing for a proper battle."

His words were echoed by Wales captain Alun Wyn Jones, who said: "If you could be involved in one, it would be this one (a match against England) because of what's gone before and the hype that goes around it. It doesn't get lost with you.

"It alters the beast a bit when you play them home or away but that adds to the excitement in the week."

England, who could yet take the title if Grand Slam-chasing France slip up, go into the match knowing it could be the squad's last game together for several months after their Six Nations final away to Rome next week was postponed because of the global outbreak of the coronavirus.

Mako Vunipola, a team-mate of George at Saracens, was stood down by England as a precautionary measure having travelled back from Tonga last weekend via Hong Kong, where there has been a major outbreak of the deadly COVID-19.

No England players have shown any signs of having contracted the virus, with George saying: "In a rugby environment a cold would go around the team a lot quicker than in the general public to we have to have a heightened awareness around hygiene.

"It definitely hasn't been a distraction, rather it's been a reinforcement that we need to prepare for this week properly.

"We have to pay our respects to Wales and prepare in the way we need to win the game."

With the Italy match postponed and England unlikely to take the key players who helped them reach last year's World Cup final on a post-season tour of Japan, Saturday's fixture at Twickenham could be the senior squad's last match together until the November international series.

"It's looking that way," George said. "It's potentially the last game together, so it's going to be an interesting one."