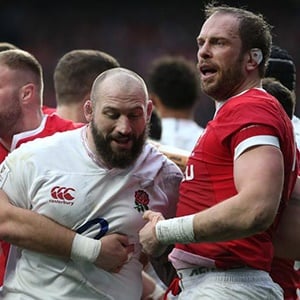 The Harlequins prop could now face a suspension as long as 24 weeks, after Six Nations bosses convened a disciplinary hearing in Dublin on Thursday.

Marler's England colleague Courtney Lawes will also face a disciplinary hearing on the same day, having been cited for a dangerous tackle during Saturday's match at Twickenham.

A Six Nations statement confirming Marler's citing read: "The England number one Joe Marler has been cited for an alleged infringement of law 9.27 (a player must not do anything that is against the spirit of good sportsmanship - hair pulling or grabbing; spitting at anyone; grabbing, twisting or squeezing the genitals."

Speaking after the match, Jones said he hoped rugby chiefs would take action despite the grab appearing playful rather than malicious.

He added: "Joe is a good bloke and lots happens on a rugby field. After 138 Tests, I know if I react it's a red card."

Manu Tuilagi's automatic hearing following a red card will also be held in Dublin, with the centre also set to discover if he will be suspended.

France's home Six Nations match against Ireland in Paris this weekend has been postponed due to the coronavirus.

The decision means that Saturday's Wales v Scotland match in Cardiff is the only remaining match on the Six Nations programme, leaving the tournament unfinished with the identity of the champions uncertain.