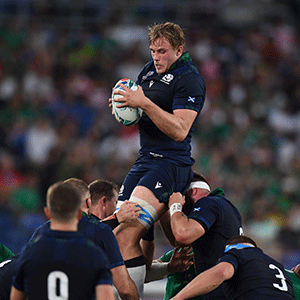 London - Scotland will be without Jonny Gray for the rest of the Six Nations championship after the lock sustained a hand injury in Saturday's 13-6 defeat to England, the Scottish Rugby Union announced on Monday.

Gray, who won his 57th cap at the weekend, is another big loss to Gregor Townsend's men, who have been without influential fly-half Finn Russell for the opening two rounds of the championship.

Russell's international future is in doubt after he revealed a breakdown in relations with Townsend.

The Scotland coach is badly in need of a result when his side travel to face Italy on February 22 after back-to-back defeats to start the Six Nations.

Townsend was already under pressure after Scotland crashed out of the World Cup at the group stages in Japan late last year.