Wales wing Adams ruled out of rest of Six Nations Cardiff - Wales' faltering defence of their Six Nations title suffered another blow on Tuesday with wing Josh Adams being ruled out of their remaining two matches.

"Josh Adams will play no further part in the 2020 Six Nations following an ankle injury sustained in the match against France," read a statement by the Wales Rugby Union (WRU).

"He is due to have surgery this week and it is envisaged that he could return in 12 weeks for the latter stages of the PRO14."

Wayne Pivac's side have just one victory from their three games thusfar.

Hopes of a repeat of the Grand Slam were ended by Ireland earlier this month and then their title chances took a hit by les Bleus.

They next play England at Twickenham on Saturday week and round off their campaign against Scotland in Cardiff on March 14.

Pivac's other options out wide are Johnny McNicholl, Jonah Holmes, uncapped Louis Rees-Zammitt and Liam Williams who could return from injury before the end of the tournament.

Wales are presently fourth in the standings, six points adrift of unbeaten France. 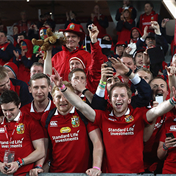