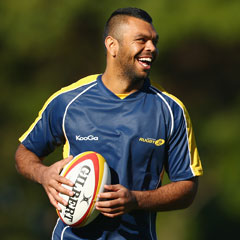 Sydney - Troubled Wallaby star Kurtley Beale is thriving on his return to the Australian camp as he battles back from alcohol-related issues, flyhalf James O'Connor said on Tuesday.

Beale is not part of the preliminary Wallabies squad to play the British and Irish Lions but has been training with the team this week and could be added to Robbie Deans' final line-up on June 11.

O'Connor, who has been picked by Deans as his favoured flyhalf ahead of Quade Cooper, said good friend Beale was in great shape.

"He's buzzing. He's bringing a great vibe around training and all the boys are getting around him and supporting him," O'Connor told reporters of Beale, who recently completed two weeks in rehab.

"KB is a character. He brings positivity and he does bring that buzz to training and a team environment."

Despite starting just once as a number 10 at international level, the nimble O'Connor has won Deans' backing and said he was not worried about being targeted by the big Lions back-line led by Jamie Roberts and Manu Tuilagi.

"When you do put that 10 jersey on - if I do get the opportunity - you are always targeted there. It's the closest channel off the scrum," he said.

"It's no different to some of the big Kiwi boys, or even some of the guys we've got running around Australia.

"But they (the Lions) will be bringing that intensity and they are class players when you look at Roberts, (Brian) O'Driscoll and Tuilagi."

The opening Test against the Lions is in Brisbane on June 22 and O'Connor said the squad was pumped up.

"I'm in a good space at the moment and the team environment is really up," he said.

The Lions kick off their three-Test tour with a match against Australian Super Rugby side Western Force in Perth on Wednesday.