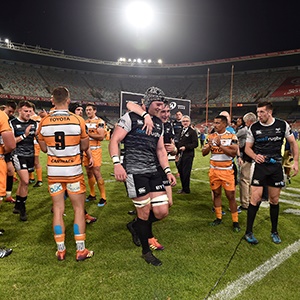 Asian based group Y11 Sports & Media has taken a "multi-million" majority share of the Ospreys, the Welsh rugby franchise announced on Wednesday.

The firm has acquired 75.1% of the four-time league winners who almost merged with rivals the Scarlets last year and have the likes of Wales captain Alun Wyn Jones in their squad.

"For some time now we've been planning a radical shift of gear and, from that, over 12-months of hard work and strategic planning has led to this new partnership," the side's chairperson Rob Davies said.

"We needed to secure the success of the past, whilst embracing fully the future and that is what we are now doing together. We're thrilled by the opportunities ahead," he added.

The PRO14 season has been suspended since mid-March with June's final cancelled due to the coronavirus pandemic and the Swansea-based outfit lies bottom of Conference A after just two league wins.

We live in a world where facts and fiction get blurred
In times of uncertainty you need journalism you can trust. For only R75 per month, you have access to a world of in-depth analyses, investigative journalism, top opinions and a range of features. Journalism strengthens democracy. Invest in the future today.
Subscribe to News24
Related Links
Bulls target Ashley Johnson earmarked for RFU coaching job
'Worried' billionaire-backed Stade Francais to cut budget by 20%
The one player each Super Rugby franchise doesn't want to lose
Next on Sport24
Irish all for South African powerhouses joining PRO Rugby