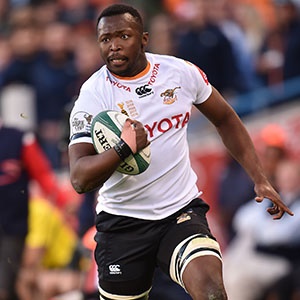 The Cheetahs have announced six contract extensions as the PRO14 continues to be suspended in the midst of the coronavirus crisis.

The contract of the American scrumhalf, Ruben de Haas, has also been extended for another year until 31 October 2021.

Coetzee has represented Namibia in two Rugby World Cups and received the Cheetahs' Super Rugby player of the year award in 2017.

Davis, meanwhile, is a former South African Schools and Junior Springbok loose forward and has played in France for both Toulon and Bayonne. He featured for the Cheetahs in numerous games in the 2018/19 PRO14, but his season was cut short when he sustained a bad fracture to his leg during a training session.

Pokomela has become a key player at the franchise since making his Super Rugby and Currie Cup debuts in 2017, while De Haas is a third generation Free State player.

His dad Pieter, and grandfather, Gerard, both represented Free State at provincial level. Born in George in the Southern Cape, De Haas grew in Arkansas where he attended Jessieville High School. He represented USA at the 2019 Rugby World Cup in Japan.