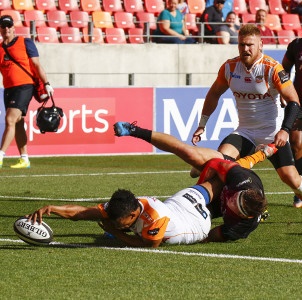 Cape Town - The Cheetahs claimed bragging rights over the Southern Kings by winning the first ever South African PRO14 derby 45-21.

The visitors dominated the first half and led 24-7 at half-time with Clayton Blommetjies, Nico Lee and Shaun Venter crossing the whitewash and Fred Zeilinga adding three conversions and penalty.

The Kings scored an early try through Yaw Penxe with Oliver Zono converting.

The second half seemed to start off in a similar vein as the Cheetahs scored within three minutes with Lee adding his second and Zeilinga again adding the extras to push the score out to 31-7.

A yellow card for Justin Basson saw the Kings use their numerical advantage to good effect as flanker Eital Bredenkamp was next to score with Zono again converting to see the score at 31-14 in favour of the visitors.

Another converted try followed, this time after a massive effort from the Kings' scrum. With 10 minutes to play, the home side were back in the contest with the Cheetahs leading just 31-21.

The Cheetahs, however, were stung into action, with Lee adding his third followed by an excellent mauling effort leading to another try, this time by Jacques du Toit.

Both were converted by Zeilinga.

And that's the way the first South African PRO14 derby ended, with the Cheetahs deserved winners against a spirited Kings side.