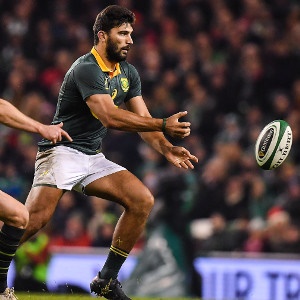 In a statement released on their official website, club said De Allende had arrived from Japan earlier this month and has completed a mandatory 14-day self-isolation period.

"Damian has followed all measures and completed his self-isolation period. The World Cup-winning centre will use the upcoming weeks to finalise living arrangements and settle into his new life in Limerick ahead of the 2020/21 season. RG is expected to arrive at the end of the month," the Munster statement read.

Another player to join is fullback Matt Gallagher, who will arrive in June from English club Saracens.

Meanwhile, Munster also confirmed that 21-year-old South African prop Keynan Knox is one of four academy players who will be promoted to their senior squad next season.

Munster, who were second in Conference B when the PRO14 was halted due to Covid-19, are coached by former Springbok assistant Johann van Graan.