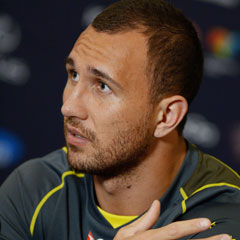 Brisbane - Wallaby vice-captain Quade Cooper declared on the eve of his second professional bout that the fight game has boosted his rugby career and he wants to go on boxing.

Cooper, who will take on 40-year-old Australian boxer Warren "The Fortress" Tresidder in Brisbane on Wednesday night, said he was determined to juggle both sports.

But the Reds flyhalf was aware that Australian Rugby Union chief Bill Pulver has indicated boxing could be out when negotiations start for a new deal with Cooper's contract, due to expire later this year.

"It's made me a more disciplined person and better athlete and only helped my rugby," Cooper told Associated Australian Press.

"And it keeps you sane. It's a great way of escaping from the pressure of being a footballer. I love doing both. I won't let either one come in the way of the other.

"I still haven't had a chat with Bill (Pulver) but after everything is out of the way I'm sure we'll be able to sit down and chat about the future.

Under new rugby coach Ewen McKenzie, Cooper has revived his career and is now among the names cited to take over the captaincy with incumbent Ben Mowen planning to move abroad.

Australia's international season kicks off with three Tests against France in June.

"It's a great honour to have your name thrown in the hat with the likes of Will Genia, James Horwill and Dave Pocock," Cooper said of the other favourites who have all already led the national team.

"I am not focusing on that. I just want to be the best team-mate I can be," he said.

"The captaincy is something that will be dealt with down the track."

He faces Tresidder, who is 15 years older and has had one professional bout which ended in a split points loss to ex-England cricketer Adam Hollioake, a veteran cage fighter.

The outspoken Cooper was hit with the biggest fine in Australian rugby history for an outburst in September 2012 about the "toxic" environment at the Wallabies camp and the defensive style of then coach Robbie Deans.