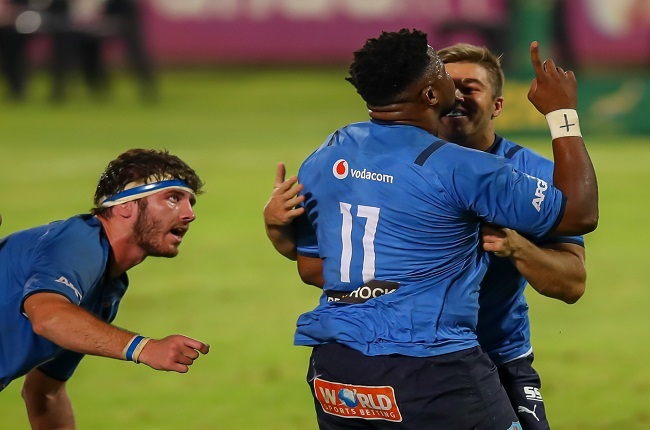 Lizo Gqoboka was a star for the Bulls. (Photo by Gordon Arons/Gallo Images)

Jake White's mantra currently is that his Bulls need to build the type of depth that would see them cope with Springbok call-ups when their playing schedule becomes more congested later this year.

Ironically, however, the exact opposite of that plan saw the men from Loftus land a major blow in the Rainbow Cup SA campaign by beating the Sharks 43-9 on Saturday night.

Banking on the experience and proven class of Lizo Gqoboka and Trevor Nyakane, White's faith was duly repaid as the duo were instrumental in setting up what was ultimately a comprehensive victory.

31-year-old Gqoboka, who's had to bide his time in the new Bulls setup due to injury setbacks, has been superb to date in this competition.

Brought on after half-time, the loosehead's first contribution was to boss fellow national team-mate Thomas du Toit at a scrum, leading to the penalty that swung the momentum into the home side's favour.

He then made a couple of prominent carries as the Bulls hammered at the Sharks' organised defence, before brilliantly diving over on the openside from close range to score the hosts' opening try.

Nyakane was less flashy, but brought stability to the set-piece and made a point of working hard on defence, even if one bone-crunching hit on Sharks lock Ruben van Heerden was ruled high and penalised.

Gqoboka's score handed the Bulls a 19-9 advantage that prompted them to show more initiative on attack.

Buoyed by the eventual dominance up front, they scored a further three tries through wing Stravino Jacobs, who exploited the Sharks' inferior numbers on defence after replacement flanker Elrigh Louw ran a splendid line in the build-up, before substitute hooker Schalk Erasmus rounded off a rolling maul.

Jacobs illustrated his burgeoning promise at the death with a brilliant aerial grab that allowed the Bulls to clinch the bonus point.

It was a demoralising final 40 minutes for the visitors, who'll feel they should've made a better fist of their opportunities in the first half.

Their sturdy defence frustrated the Bulls, who looked bereft of ideas and were also starved of possession.

In fact, by all accounts the home side were only kept in the frame by the educated boot of flyhalf Morne Steyn.

Both sides were also guilty of iffy decision-making on attack as well as poor handling.

But, instead of matching the patience of their hosts and taking heart from keeping them in check, the Sharks cracked.

Penalties: Bosch (3)
We live in a world where facts and fiction get blurred
In times of uncertainty you need journalism you can trust. For only R75 per month, you have access to a world of in-depth analyses, investigative journalism, top opinions and a range of features. Journalism strengthens democracy. Invest in the future today.
Subscribe to News24
Next on Sport24
5 talking points | PRO14 Rainbow Cup season review