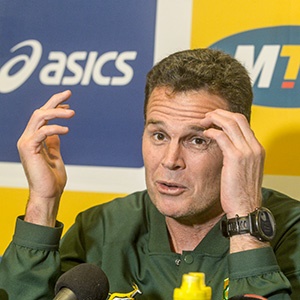 Cape Town - Springbok coach Rassie Erasmus denies that he has offered to coach the Bulls in next year's Super Rugby tournament.

Eyebrows were raised on Saturday when reports suggested that Erasmus was being linked as a possible replacement for John Mitchell at Loftus next season, with the former All Black coach expected to leave the Bulls in the coming weeks.

But, speaking at OR Tambo International on Saturday ahead of the Boks squad's departure for Australia, Erasmus provided some clarity on the situation.

He explained that the whole idea of him coaching the Bulls had stemmed from a "rumour".

Instead, Erasmus explained that, in a World Cup year, it might make sense for him to spend some time with the Bulls if they are working with a new coach next year.

Flyhalf Handre Pollard, expected to be the starting No 10 at next year's World Cup, is struggling currently while the Bulls have a number of other Boks including Handre Pollard, Ivan van Zyl, Embrose Papier, Marco van Staden and Jesse Kriel.

"No, no. I’m not planning on coaching the Bulls at all," Erasmus said.

"It’s a difficult situation when someone starts a rumour like that and you need to explain. What I offered them is something that people don’t always understand at face value.

"It looks weird because these things aren’t official. Jacques Nienaber went with both the Lions and Stormers on their Super Rugby tours and I spent some time with the Sharks.

"Overall, we try to help out where we can. If the Bulls want some help with their transition, it’s part of my portfolio as director of rugby to assist. But I don’t want to coach them full-time."

The Boks take on the Wallabies in Brisbane on Saturday. Kick-off is at 12:00.

We live in a world where facts and fiction get blurred
In times of uncertainty you need journalism you can trust. For only R75 per month, you have access to a world of in-depth analyses, investigative journalism, top opinions and a range of features. Journalism strengthens democracy. Invest in the future today.
Subscribe to News24
Related Links
Rassie: Boks are 'hurting', 'desperate' and 'feeling pressure'
Cheetahs fail to score, thrashed by Johann van Graan's Munster
Lions come out on top in Loftus try-fest
Next on Sport24
Argentina battle back to earn draw against Australia in feisty Tri Nations affair