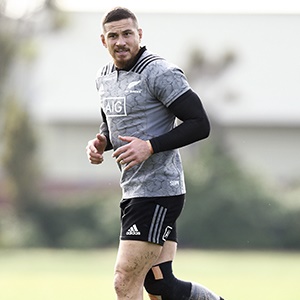 Cape Town - Star All Blacks centre Sonny Bill Williams could feature against the Springboks in their much-anticipated Rugby Championship clash in Wellington on Saturday.

Kick-off is at 09:35 SA time and the match will be screened live on SuperSport 1.

According to the Stuff.co.nz website, Williams took part in the All Blacks' training session at the Hutt Recreation Ground in Wellington on Tuesday.

Williams, 33, has been struggling with a nagging hamstring injury and although he did travel to Buenos Aires last weekend for the All Blacks' opener against Argentina, he wasn't named in the match-day 23-man squad.

Ngani Laumape and Anton Lienert-Brown started that match in midfield in a Test the All Blacks narrowly won 20-16.

Centre Jack Goodhue has rejoined the camp after being been given the week off along with most of his Crusaders team-mates, however Ryan Crotty remains sidelined with a thumb injury.

All Blacks assistant coach Ian Foster told the Stuff.co.nz website that Williams will be given until Thursday to prove his full fitness.

"He’s travelled well, trained fully today, so again it’s a matter of making sure he’s come through that with no ill effects tomorrow (Wednesday) and Thursday morning, and see what unfolds," Foster said.

"He’s a bit nervous. He wants to know what’s happening and he’s like every other player now. There’s that apprehension and excitement, but at the end of the day we’ve got to get him focused on learning and doing what he needs to do then we’ll make the selections that we see as right."

Williams has played 51 Tests for the All Blacks and is a two-time Rugby World Cup winner having tasted success in 2011 and 2015.

We live in a world where facts and fiction get blurred
In times of uncertainty you need journalism you can trust. For only R75 per month, you have access to a world of in-depth analyses, investigative journalism, top opinions and a range of features. Journalism strengthens democracy. Invest in the future today.
Subscribe to News24
Related Links
Aussie ref for All Blacks-Springboks Test
Sharks to go internal with Du Preez coach replacement?
Bok Test: Revenge not on All Blacks' minds
Next on Sport24
Gutsy Argentina endure 'epic adventure' to play in 'Bokless' Tri Nations