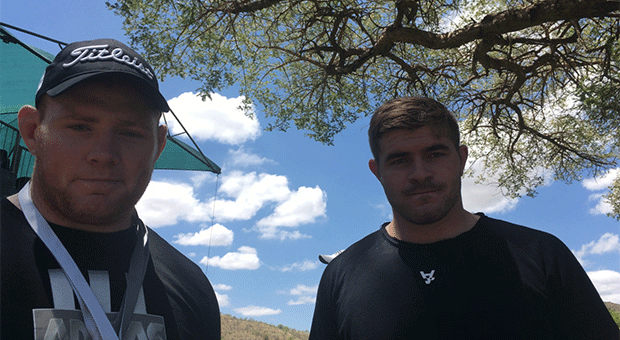 The Springboks embarked on a nationwide tour which saw them parade the Webb Ellis Cup from an open-top bus in Johannesburg, Pretoria, Durban, East London, Port Elizabeth and then Cape Town.

The Boks made history earlier this month as they romped to their third World Cup title when they beat England 32-12 in Yokohama.

Kitshoff admitted that the trophy tour was one of the most incredible moments of his life.

"We are still buzzing a bit," Kitshoff told Sport24 at the Gary Player Country Club on Wednesday.

"What an incredible moment in our lives and as a team we're still buzzing. We're just here (at Sun City) to enjoy ourselves and have a good time."

Marx and Kitshoff are at Sun City to watch this week's Nedbank Golf Challenge.

"We're here to relax and watch some good golf. We are both massive supporters and admirers of the game. What an honour to watch the world's best play," said Marx.

The Springbok hooker says he'll have a bit of break before heading to Japan where he will take a sabbatical until June 2020 when he will link up with the Lions .

"I've got a two-week break and then I head over to Japan," said Marx.

Meanwhile, Kitshoff confirmed he will take a break from the game until he runs out for the Stormers in next year's Super Rugby.

"Super Rugby only starts in January and then I have a training in December. Otherwise, I'm just taking a break from rugby here (in South Africa)," said the prop.

We live in a world where facts and fiction get blurred
In times of uncertainty you need journalism you can trust. For only R75 per month, you have access to a world of in-depth analyses, investigative journalism, top opinions and a range of features. Journalism strengthens democracy. Invest in the future today.
Subscribe to News24
Related Links
WATCH | Eddie Jones spots something he likes on Beast's wrist
Stormers set to lose yet another star youngster
Fiji lock suspended by Racing after arriving late from RWC
Next on Sport24
SA Rugby boss on turnaround: 2016 was our darkest period