Bok RWC win so much bigger than rugby, says Habana 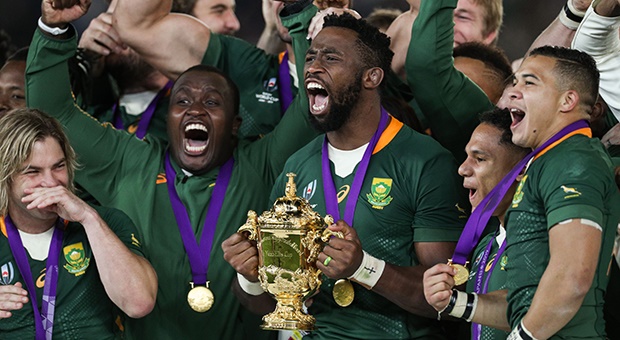 South Africa's third World Cup triumph  was marked by the side's first black captain Siya Kolisi receiving the trophy in a sport that for decades was seen as a bastion of apartheid.

Habana, who was in the side that beat England in 2007, said the sight of Kolisi leading the team would inspire millions of South Africans.

"I'm taking a moment to take it all in - this is what the best dreams are made of," Habana told broadcaster ITV.

"This moment will be etched forever not only on the trophy but for every South African.

"This has been a journey which has been so transformational.

In a nod to the past, Kolisi was wearing the same number six that white captain Francois Pienaar wore when he accepted the trophy from South Africa's first black president Nelson Mandela in 1995.

Kolisi briefly joined Habana on the ITV interview podium and the two locked in an emotional embrace before Kolisi said: "This gives hope. I never thought I would be living this experience.

"When I was a kid all I was thinking about was getting my next meal."

Habana said he hoped the victory marked a turning point for both the country and the sport.

"This will be so much bigger than just for rugby and also for a new generation watching back home," said Habana.

"It is incredibly special to see a story like Siya's and the journey he has been on for the last seven years.

"To see a guy galvanise a team which did not seem possible (winners) 18 months ago is extraordinary.

"With him at the helm I hope this story lingers on a long time."

Kolisi said having his father at the match was a way of repaying him.

"I believe you never forget where you came from and those who helped you," he said.

For Habana, capped 124 times, South Africa were by far the better team as they upped their performance considerably after their dour semi-final win over Wales.

"Absolutely phenomenal. Nobody expected such a commanding display. They won all the big battles," said Habana.

"At this level of rugby if you cannot scrum properly you are always going to come second. England will be bitterly disappointed, they never fired a shot.

"They can have no complaints but also there should be no recriminations. England are a strong side, they just got belted."

Jonny Wilkinson, whose drop goal in the dying seconds of the 2003 final sealed a remarkable win, said England had been unable to adapt their game from the one they played so impressively to beat the All Blacks in the semi-final.

"The needed a dfferent type of performance and could not produce it," Wilkinson told ITV.

"The South African defence had power over the ball and never allowed England to move the ball.

"South Africa were ruthless and relentless and got better as their confidence grew.

"The had a huge emotional attachment to this game and were a different side to the one last week."

Irish rugby legend Brian O'Driscoll put the win down to the 'Boks' defence.

"They were outstanding, they played with a lot of ambition," said O'Driscoll.

"A special mention to their defensive coach Jacques Nienaber, who turned their defence into an attacking weapon.

"The Kolbe try came from a from a terrific hit by Malcolm Marx.

"This is terrific for them as they, like Wales, are a nation that lives and breathes rugby."

My comrade, OUR CAPTAIN!!!

We live in a world where facts and fiction get blurred
In times of uncertainty you need journalism you can trust. For only R75 per month, you have access to a world of in-depth analyses, investigative journalism, top opinions and a range of features. Journalism strengthens democracy. Invest in the future today.
Subscribe to News24
Related Links
WATCH | Captain Fantastic Siya Kolisi lifts the Webb Ellis Cup
All Blacks lead praise for world champion Springboks
Shattered Farrell blames poor start for England loss
Next on Sport24
SA Rugby boss on turnaround: 2016 was our darkest period