England made to work in downing 14-man Argentina 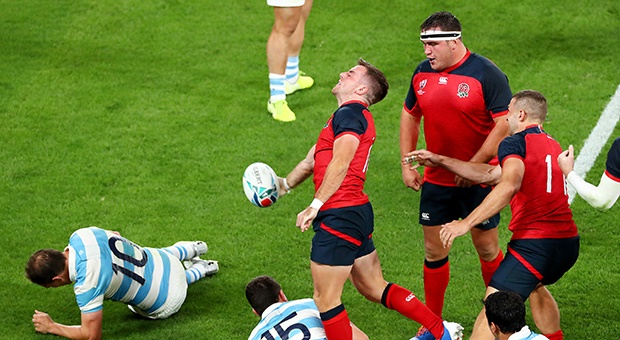 Tokyo - England became the first team to reach the Rugby World Cup quarter-finals on Saturday after a 39-10 bonus-point win over Argentina, who had a man sent off for a high tackle.

As it happened | England v Argentina

Jack Nowell celebrated his return from injury with a late try, one of six scores for Eddie Jones's men, who can now look to a last-eight clash likely against either Wales or Australia.

"We're exactly where we wanted to be - we're 15 points after three games," said England coach Eddie Jones, who had to tell his players to "simplify" at half-time, despite their man advantage.

"With them having one (player) off we were probably just trying to push the game a little bit too much and we were a bit rusty too after two easy games and a long break."

In perfect rugby conditions at Tokyo Stadium, the Pumas started the brighter, a delightful cross-field kick finding Matias Moroni in space, who jabbed the ball forward but was just beaten to the line by a covering Jonny May.

The Pumas nearly went over after the resulting five-metre scrum but had to settle for three points in front of the posts, slotted by flyhalf Benjamin Urdapilleta to send their noisy supporters into raptures.

But Eddie Jones' men hit back instantly, a catch-and-drive from a line-out creating space out wide for May to dot down on the left-wing.

Veteran Argentina hooker Agustin Creevy had described the match as "like a war" and passions boiled over in the 12th minute with an off-the-ball scrap sparked by a hit from Pablo Matera.

The 14-man Pumas quickly found themselves stretched and fullback Elliot Daly exploited a huge gap on the left for a try that doubled England's advantage.

And scrum-half Ben Youngs celebrated overtaking Johnny Wilkinson in terms of caps with a trademark sniping score deep into extra time, giving England a 15-3 lead at the break.

The only concern for Eddie Jones after 40 minutes would have been the form of Farrell, who appeared to have left his kicking boots at home - missing all four shots at goal.

The dismissal killed the match as a contest and George Ford sealed the four-try bonus point early in the second half, Farrell this time slotting the extras.

The second half was a disjointed affair and a packed Tokyo Stadium resorted to a Mexican wave for entertainment.

The Pumas had rarely threatened the England line but enjoyed some success with less than 10 minutes to go as winger Moroni finished off a slick move with a try under the posts.

But replacement Nowell bounced off two defenders for a sensational try in the corner before Cowan-Dickie sealed it with England's sixth.

"The commitment of the boys was incredible and it lasted the whole game. It became too difficult but they never stopped fighting," he added.

Early quarter-final qualification is redemption for England after the humiliation of four years ago when they were the first World Cup hosts to miss out on the knock-out stages.

Next for Jones is a potential winner-takes-all meeting with arch-rivals France in Yokohama on October 12 to top Pool C - this World Cup's 'group of death'.

Argentina's hopes of qualifying hang by a thread. They must beat the United States on Wednesday and hope France lose their two remaining fixtures against Tonga and England.