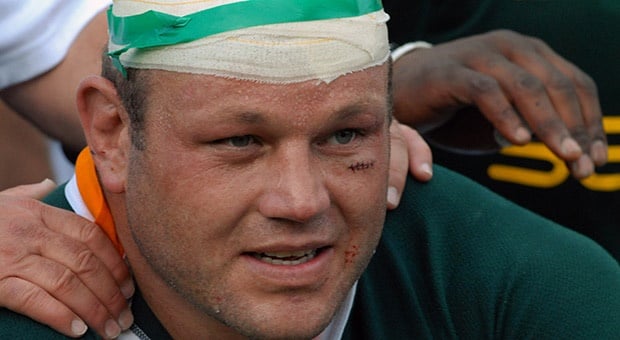 Sport24 asked: How does it feel to be a World Rugby Hall of Fame inductee?

Os du Randt: It feels good to have been inducted into World Rugby’s Hall of Fame. I was fortunate to have a good support base in South Africa no matter where I played but to know that the appreciation comes from overseas as well makes it really special. Obviously I would have liked to have collected the award in person (John Smit accepted the award on Du Randt’s behalf) and it was a pity I wasn’t in Japan. I tried to organise everything but it was a little bit difficult to get away and rearrange everything… It’s a great privilege to be one of only two South Africans to have won the World Cup twice. (Du Randt is a double World Cup-winner from 1995 and 2007 and Francois Steyn joined the exclusive club with victories in 2007 and 2019). Fransie is a great guy and at least I’m not lonely anymore! We can now brag about the achievement together and have a little chat around it.

Sport24 asked: What inspired your Test comeback after calling time in 2000?

Os du Randt: I retired with 39 Test caps and returned to win a further 41. I obviously wanted to still play for the Springboks and, owing to the way I had to retired through injury, I felt I wasn’t done. In my heart I still felt that there was something left. I got the chance with Jake White in 2004. Just being part of the Springbok set-up again, after I had tried to convince myself I was done after 39 Tests, was special. Suddenly I started playing again and was among great players. It was a privilege for me to once again be involved in Bok rugby. Aside from Jake, Rassie Erasmus was influential in me launching a comeback. Rassie was my teammate and when I made my comeback he was still playing and then moved into coaching. You always know what to expect from him. He is passionate about the game and knows exactly what he wants. My experience with Rassie is that he never switches off from rugby. If you had to open up his brain you would see rugby drawings, plans and running lines! Hopefully he can now relax a bit after winning the World Cup and enjoy quality time with his family.

Sport24 asked: Do you believe Erasmus outwitted Eddie Jones in the final?

Os du Randt: I absolutely think the Springboks surprised the whole world with their performance in the final against England. Before the final, I had urged the Springboks to be more brutal, get even more in the face of the opposition and carry the ball stronger. We had the starting pack of forwards to do it and an equally powerful unit of forwards off the bench... I think it was a brilliant move playing the game a bit wider and kicking more out of hand towards our wings. Never before in a World Cup final had we played behind the forwards back towards the backline players. I thing it took conviction and foresight from Rassie to have that plan in mind. He had this one master plan up his sleeve and all the credit to him for planning that. To outwit a wily old fox like Jones is something really satisfying. Eddie has done it so many times in the past against the Springboks that you almost want to hate him for that. To get one over him when it counted was a nice feeling for South Africans.

Sport24 asked: What is your assessment of South Africa’s scrum supremacy?

Os du Randt: As a former front rower myself, we as South Africans have always prided ourselves on our scrums since the day we started playing rugby. It was special to see us establish our scrums as a great attacking platform and as a place to dominate and create penalties. Especially in playoff games, if you can scrum for penalties and then kick for territory or go for the three points it’s gold in a semi-final and especially a final. The team got behind Rassie and said: “Let’s use our strengths rather than try to play the rugby that everybody wants us to play.” Everybody wants us to compare with that New Zealand style of throwing the ball around or even England up until the final. They played spectacular rugby, whereas the Springboks didn’t but the men in green and gold stuck to their strengths. I think that was absolutely brilliant from the Springbok side. In the first half of the final, I thought we really scrummaged well and in the second maybe not as well. But we still kept the pressure on England, did our job and that laid the platform for the solid performance we delivered.

Sport24 asked: Who do you rate as the premier loosehead in the game today?

Os du Randt: At the moment, I would say that it’s a toss-up between Tendai “Beast” Mtawarira and Steven Kitshoff. I thought Beast, who has announced his retirement from international rugby, had a great World Cup and did his basics extremely well. I would have started Kitshoff against England but Beast actually scrummaged better in the final than the former. In terms of the legacy Beast leaves behind, he played a lot of Tests and I believe he has left the jersey in a better place than he found it... When it comes to picking my first-choice loosehead prop for the Springboks, it’s just a matter of who is sharper and who wants it more. Front row play and scrummaging is a totally different ball game from one match to the next. It can easily change. I agree wholeheartedly with Rassie, who said that you can start either of those two front rows and they won’t let you down. The one thing New Zealand has had for the last decade is that any player could come from the bench onto the field and is as good as the guy that started or even better. With the pack of forwards in our possession, it’s brilliant Rassie played to our strengths. By all accounts, we might not have that same advantage in the backline but we certainly have that point of difference in the pack of forwards. We were bringing on guys off the bench who were just as good or if not better than the starters. The 6-2 forwards to backs bench split was a good strategy but bear in mind you don’t want injuries in the backline. It’s a risk that was worth the reward, as it obviously paid off for us during the first-ever World Cup in Asia.

Sport24 asked: What do you make of Jacques Nienaber replacing Erasmus?

Os du Randt: With Rassie having announced his decision to step down as Springbok head coach to fulfil the director of rugby role full-time, and Jacques set to be appointed as national head coach, in some sense it’s a continuation of Rassie’s methods and coaching style. He will still be involved albeit to a lesser degree and Nienaber’s appointment would take a little bit of pressure away from Erasmus. The first time I met Jacques he was a physiotherapist in Bloemfontein and then he moved on to become a defence coach. I had a few dealings with him over the years. He is a great guy, is passionate and knows the defensive game. He has probably learned a lot since I hung up my boots. Jacques and Rassie must have discussed the plans for him to continue. Rassie would have Jacques involved with every decision and the planning process to make sure that he knows what needs to be done to make it work…To maintain the momentum from the World Cup, we need to keep playing our best players and ensure that the systems, which are in place now, are made stronger. I believe the continuity in itself will make this team stronger. When the team gets together again, it won’t be about new plans which have to be laid out and trained in. In the past, we have almost always taken five steps backwards but now at least the game can evolve owing to continuity in terms of coaching and playing personnel. If, after 18 months to two years, we can be at an even better level than we are at now, then in four years’ time the Springboks can seriously look to retain the World Cup crown.

Sport24 asked: Do you agree this triumph is even more significant than 1995?

Os du Randt: I agree with my former skipper Francois Pienaar who said, “This is bigger because it is a transformed team, 58 million people watched in South Africa and all races would have woken up wearing green, which wouldn’t have happened in my time.” At that stage during the 1995 World Cup, we were just coming out of Apartheid in South Africa and obviously our victory played a huge role in terms of nation-building. However, I think the win this time is even more important and it must send a type of message to the politicians: We as South Africans can learn to work together and want to make it happen. I also think that with Siya Kolisi as the first non-white captain it makes it massively special. The bulk of the South African population will feel they are now more involved and the team is more representative. We just need to get it right from the top and then the people will follow. Hopefully South Africa’s World Cup win will contribute to unifying the nation. I am sick and tired of South Africa being looked down upon and what I would like is for this country to go forward and for us to be proud to present ourselves out there. I also want us to enjoy the respect of the rest of the world which is the case at the moment, having claimed the Webb Ellis trophy for a third time.

We live in a world where facts and fiction get blurred
In times of uncertainty you need journalism you can trust. For only R75 per month, you have access to a world of in-depth analyses, investigative journalism, top opinions and a range of features. Journalism strengthens democracy. Invest in the future today.
Subscribe to News24
Related Links
Venter calls England tactics in World Cup final 'ludicrous'
Free State Rugby unhappy with Bok trophy tour snub
Boks: Come in Kitsie, your time is now!
Next on Sport24
SA Rugby boss on turnaround: 2016 was our darkest period