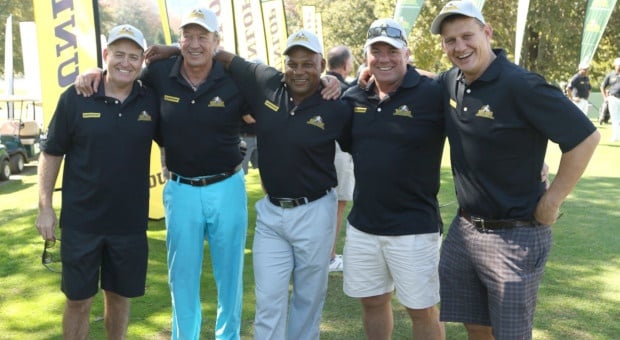 “We would like to convey our heartfelt condolences to Chester’s wife Maria, his children, Matthew, Chloe and Ryan, and all his close family and friends. We are extremely grateful for Chester’s hard work and dedication to rugby throughout his successful career," said Stefan Terblanche, CEO of SARLA.

Williams, who played 27 Tests for the Springboks in which he scored 14 tries, was part of the squad that won the 1995 World Cup. He famously scored four tries in the quarter-final encounter against Samoa.

He also toured with SARLA on a number of occasions following the conclusion of his professional career.

“Chester actively participated in rugby development initiatives by assisting at several coaching clinics. He also toured with SARLA on a few occasions and many of us have extremely fond memories of the time we spent with him. Chester was a giant among us, whose contribution to rugby will never be forgotten. May he rest in peace,” said Terblanche.

President of SARLA, Gavin Varejes also praised Williams, saying he would be remembered for his positivity, ability to motivate other and his tenacity.

“Chester was a good man who was taken from us too soon. We’ll never forget his energy and positivity. One of his greatest strengths was motivating others and helping them reach their full potential. We’ll miss his tenacity, his giving nature and his ability to make others feel good about themselves.”

Following his retirement from professional rugby, Williams remained active in coaching, both locally and internationally – notably with the Springbok Sevens team, the Romanian, Tunisian and Ugandan national teams, and the Pumas in the Currie Cup and finally, as head coach of the University of the Western Cape.

SARLA invited all players, both past and present to attend Williams' funeral which will be held on Saturday, September 14 at Newlands Stadium at 12:00.

We live in a world where facts and fiction get blurred
In times of uncertainty you need journalism you can trust. For only R75 per month, you have access to a world of in-depth analyses, investigative journalism, top opinions and a range of features. Journalism strengthens democracy. Invest in the future today.
Subscribe to News24
Related Links
Ritchie cleared to join Scotland squad in Japan
Crash, bang! Ox to extend rich Sharks tradition
Blitzboks coach Powell to experiment at Oktoberfest7s
Next on Sport24
SA Rugby boss on turnaround: 2016 was our darkest period

Choose your newsletters
Voting Booth
Having lost the first Test against the British & Irish Lions, can the Springboks recover to win the series?
Please select an option Oops! Something went wrong, please try again later.
Yes, they will win the series 2-1. Go Bokke!
53% - 3017 votes
The Boks will win a Test, but will lose the series 2-1.
29% - 1638 votes
It's not looking good. A 3-0 whitewash is on the cards.
18% - 1053 votes
Previous Results
Tokyo Olympics
LIVE
LIVE | Tokyo Olympics Day 6: Chad le Clos eliminated from 100m butterfly