Soweto to welcome world champion Boks, a team they once hated 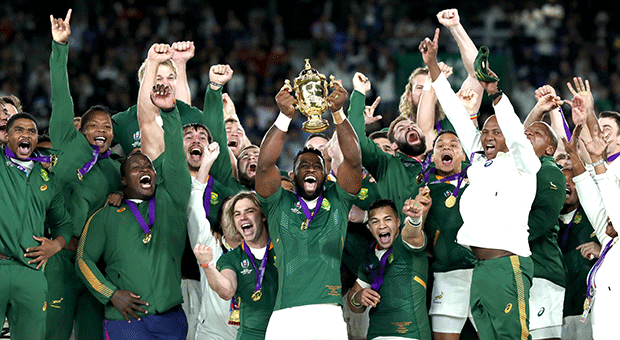 Johannesburg - A national tour by Rugby World Cup winners the Springboks begins on Thursday and one of the first stops will be Soweto, a township where they were once hated.

"Sowetans used to say the Springboks were the (governing) National Party at play," recalled Bongani Dlamini, a long-time Soweto resident and retired teacher, in an interview with AFP.

"For black people, the rugby team came to symbolise the arrogance of Afrikaner power. They despised the Springboks.

"Many Sowetans are proud wearers of Springbok (replica) shirts today - 30 years ago anyone foolish enough to wear one would have put their life at risk.

"The Springboks owe a debt of gratitude to (deceased former state president) Nelson Mandela. He changed the way we viewed the team."

Dlamini will cheer the Springboks on Thursday as they drive through Soweto in an open-top bus and believes many others will do likewise.

"The first sporting love of the people is football with the two most popular clubs in the country (Kaizer Chiefs and Orlando Pirates) from here.

"But there has never been more interest in rugby than now. Our national football and cricket teams keep letting us down while the Springboks succeed and offer hope.

"What I want to see is continuity. Black players must be given equal opportunities. That is all we ask. I have no time for racial quotas, just fair selections.

"The captain (Siya Kolisi) and the coach (Rassie Erasmus) have spoken wisely since the final. I pray that our politicians are listening."

Just months after becoming the first democratically elected president of the republic in 1994, Mandela successfully fought to save the Springboks name and emblem.

Elements within the ruling African National Congress (ANC) wanted a name dating back decades and the emblem of the leaping Springbok banished because of its racist past.

For 90 years from the first time the team played in 1891, the South African national rugby team chose only white players.

There was even segregation among black players, who were divided into Black African and Coloured (mixed race) leagues with no international participation.

Mandela, desperate to unite all South Africans after the divisiveness of apartheid, backed the Springboks in the build-up to the 1995 World Cup, which South Africa hosted.

His gamble worked with the Springboks defeating arch rivals New Zealand 15-12 in a thrilling final watched by a capacity 63 000 crowd crammed into Ellis Park in Johannesburg.

Mandela arrived at the ground in a replica of the shirt worn by Springbok captain Francois Pienaar and the predominantly white crowd chanted "Nelson, Nelson, Nelson".

But amid the euphoria of lifting the trophy at the first attempt, pleas by Mandela and government ministers for a racially balanced Springboks team were ignored.

Only one black player, winger Chester Williams, who died two months ago, was in the 1995 side and two black wingers, JP Pietersen and Bryan Habana, made the 2007 World Cup-winning side.

As the years passed, it seemed black players were only being considered for the two wing positions. There was no sign of a black forward gaining recognition.

Eventually, prop Tendai 'Beast' Mtawarira, who retired this week having won 117 caps, forced his way into the team regularly, but racial transformation was painfully slow.

Even the first two black Springbok coaches, Peter de Villiers and Allister Coetzee, persisted with teams that did not reflect a country whose population was 90 percent black.

Erasmus, an Afrikaner and former Springbok forward, succeeded the struggling Coetzee last year and vowed to "act rather than talk" when it came to giving black stars equal opportunities.

His legacy was the side that outplayed England 32-12 last Saturday in Japan to give the Springboks a record-equalling third World Cup title.

Kolisi is black, so were six other starters, and there was yet another on the bench for a total of eight in a match-day squad of 23.

Not quite the 50% blacks promised by SA Rugby to the government some years ago, but when colour is no longer a Springbok issue, Erasmus will be remembered as the man who smashed the mould.

The coach who celebrated his 47th birthday this week has conceded that the goodwill generated by the 1995 and 2007 World Cup triumphs came to nought and must not happen again.

Speaking just minutes after arriving home, he said "I want to see blacks and whites and people of different religions and beliefs working together and getting it right".

We live in a world where facts and fiction get blurred
In times of uncertainty you need journalism you can trust. For 14 free days, you can have access to a world of in-depth analyses, investigative journalism, top opinions and a range of features. Journalism strengthens democracy. Invest in the future today. Thereafter you will be billed R75 per month. You can cancel anytime and if you cancel within 14 days you won't be billed.
Subscribe to News24
Related Links
World Cup winner Kolbe nominated for Top 14 award
Legendary Springbok “Beast” retires at the top
Rassie reveals how he turned Boks into champions in 18 months
Next on Sport24
SA Rugby boss on turnaround: 2016 was our darkest period

Get the newsletter
Voting Booth
Would you be keen to see the Springboks join the Six Nations?
Please select an option Oops! Something went wrong, please try again later.
Yes! The Northern Hemisphere is the future.
53% - 3436 votes
No! The Rugby Championship is still the pinnacle.
47% - 3052 votes
Previous Results
Showmax
The story of a legend: Sir Alex Ferguson