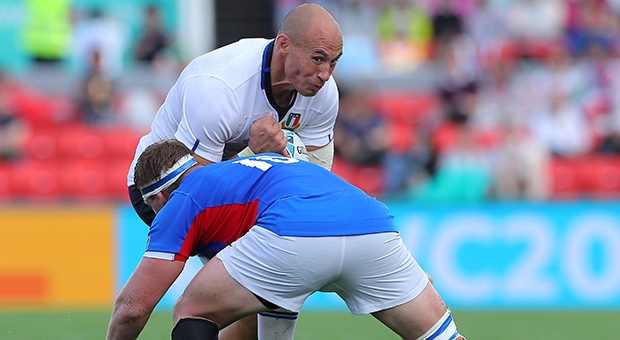 Higashiosaka - Italy coach Conor O'Shea said his team were "disappointed" with their Rugby World Cup start after they were forced to come from behind in an error-strewn 47-22 win over lowly Namibia on Sunday.

Talisman captain Sergio Parisse became only the third man to play in five Rugby World Cups but even he admitted it was "not maybe a really nice match to see" as wind and at times torrential rain lashed the Hanazono Stadium.

Often Six Nations whipping boys, Italy are targeting their October 4 clash against South Africa as a possible route to reaching the knock-out stages for the first time but this patchy display will not leave the Springboks unduly worried.

"We'll have to move on from that pretty quickly. It wasn't very pretty. There's too many errors in it," said O'Shea.

"It was difficult conditions at times in the second half, which doesn't excuse it. But we'll be disappointed with the way we played... that's not the true version of us," said the Irishman after the bonus-point win.

Namibia's defence coach had promised to treat fans to an impromptu haka if his minnows pulled off a shock and it was the unfancied Welwitschias who started the brightest.

The underdogs led with only five minutes on the clock, seizing on an overthrown line-out to produce a flowing move down the right flank finished off acrobatically by scrum-half Damian Stevens.

Italy hit back within minutes, a Parisse-inspired push-over in the scrum resulting in a penalty try as Namibia collapsed on their line.

The Italians squandered several chances in a nervy and mistake-ridden first half but eventually took the lead in the 26th minute as they unpicked the Namibian defence for fly-half Tommaso Allan to touch down under the posts.

The champagne moment of the match came on the stroke of half-time as Federico Ruzza's no-look pass let in Tito Tebaldi for a try, well converted to give the favourites a 21-7 lead at the break.

With the match being played on the fringes of a typhoon, rain hammered down in the early part of the second half and Italy extended their advantage almost immediately through an Edoardo Padovani try after a clever kick behind Namibian lines.

Italy never looked in danger of losing the match, scoring three further tries via Carlo Canna, Jake Polledri and Matteo Minozzi, but the spirited Namibians refused to lie down and a touch-down from winger JC Greyling was greeted with roars from the capacity crowd.

A mazy Chad Plato try under the posts gave the Namibians a final consolation score just before time.

"The important thing today was to win and take the five points," Parisse said.

"Big congratulations to Namibia as well because they never gave up. They kept playing to the end."