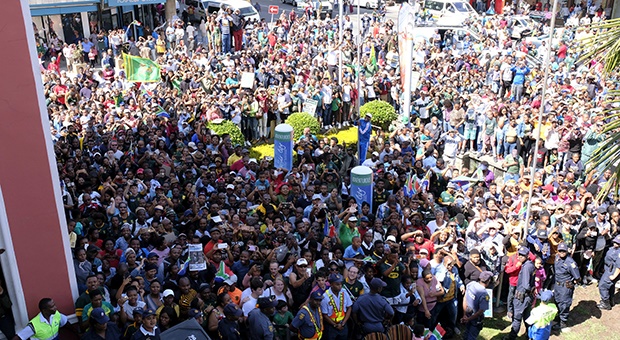 Cape Town - According to the SABC website, SA Rugby could yet send the Webb Ellis Cup - and a handful of Springboks - to provinces excluded from the ongoing Champions Tour of the country.

READ | ON THE BUS: The day Durban smiled on the Springboks and Beast

The victorious 2019 Rugby World Cup-winning Springboks visited Johannesburg, Pretoria and Soweto on Thursday, Durban on Friday and are currently in East London on Saturday.

On Sunday the tour will stop in Port Elizabeth, before concluding in Cape Town on Monday.

Shortly after the itinerary was confirmed, Free State Rugby expressed its disappointment at being excluded as a major centre from the euphoria experience .

In a statement released on Thursday, the union's president Jerry Segwaba said: "Free State Rugby shares the frustration and unhappiness of supporters, specifically due to the fact that the central region has not been included in the victory tour of the Springboks.

"The region produced a number of Springboks, coaches, referees and administrators over the years and specifically in this World Cup (11 persons were involved - including coaches, players, and referee, Jaco Peyper)."

Segwaba added that the decision was based on challenges relating to Regulation 9, which meant that national players must return to their contracted entities, national and abroad, by Monday and that fitting the region into the travel schedule proved too difficult.

However, that doesn't appear to be accurate with the Mother City tour only due to end around 17:00 on Monday.

Northern Cape Premier, Zamani Saul, also expressed his dissatisfaction with the exclusion of the Northern Cape from the tour.

“It can’t be that when there are such critical events happening in this country we get excluded, that is the struggle which this generation of ours we should wage, and when we wage that struggle we should wage it forcefully without fear or favour to make everyone in South Africa to appreciate the fact that Northern Cape is one of the provinces of South Africa. And in the Northern Cape we’ve got people here who also aspire to be part and parcel of the new dawn which is articulated by the president.”

We live in a world where facts and fiction get blurred
In times of uncertainty you need journalism you can trust. For only R75 per month, you have access to a world of in-depth analyses, investigative journalism, top opinions and a range of features. Journalism strengthens democracy. Invest in the future today.
Subscribe to News24
Related Links
Australia - and not SA - to host 2027 Rugby World Cup?
Picture of schoolboy dwarfing Etzebeth has social media in a buzz
Nigel Owens left in tears by gesture from Farrell, Read
Next on Sport24
SA Rugby boss on turnaround: 2016 was our darkest period