Blitzboks looking to keep calm at Cape Town Sevens: 'We have a plan that suits our weapons' 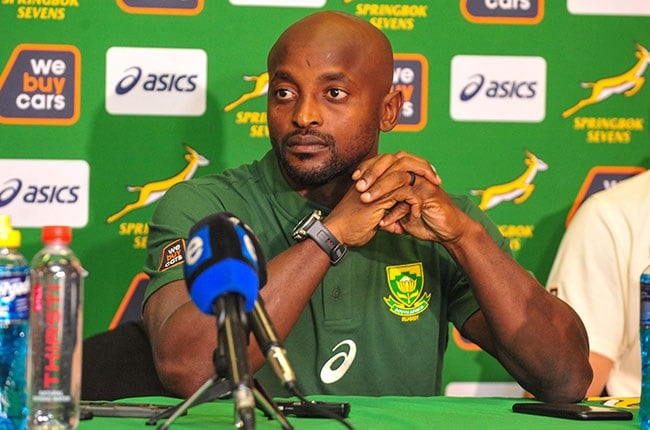 After winning their 10th Dubai crown last weekend, the Blitzboks are looking for their first trophy at home since the inaugural Cape Town tournament in 2015.

South Africa will contest a tough Pool A alongside Fiji, France and Canada at Cape Town Stadium.

The Blitzboks have made one change to their squad, with Darren Adonis replacing the injured Dewald Human.

Adonis will be involved in his ninth World Series tournament but will make his first appearance in the Mother City.

Ngcobo believes the 24-year-old Adonis will thrive in the Blitzboks team as they'll be looking to create opportunities in front of the faithful Cape Town crowd.

"We trust him and he has trained in that position before. Every player in our system is very unique and we'll try and make sure that the plan that we're trying to accomplish [works]," Ngcobo told reporters at the The Cullinan hotel on Wednesday.

"We have a plan that suits our weapons that we have, which are the players. Just doing the little things right and using your opportunities.

"Sevens is a game of opportunities and we've created those and we didn't really finish them off. We're working hard to make sure that we execute thoroughly and defensively we keep things out. We'll do that by focusing on ourselves and processes."

READ | Cape Town Sevens: When the Blitzboks are in action

It has been an up-and-down year for the Blitzboks. They finished runners-up to Australia in the 2021/22 World Rugby Sevens Series and then bombed at the Sevens Rugby World Cup in Cape Town, before seeing long-time coach Neil Powell depart.

Blitzboks star Impi Visser said while the Cape Town Sevens can be overwhelming to the home side, he still backed their experienced campaigners to pull through.

"We need to realise it's a big occasion and you need to soak it all in, especially when you run out in the first game. It's quite electric and loud, you need to realise how big the stage is, but you just need to take a breath and come in together as a team," said Visser.

"We try and take it from one of our training sessions because we try and simulate the same kind of pressure situations. We try and get as close as possible to game-related stuff.

"There's a lot of experienced guys on the field that will keep the guys calm in those pressurised situations. It's all about taking it in and listening to the right voices."