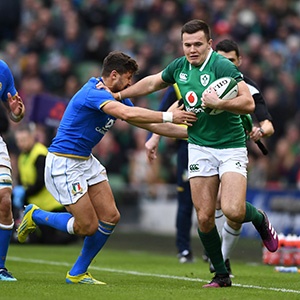 Dublin - Ireland secured a bonus point in running in eight tries to outclass hapless Italy 56-19 in their Six Nations clash at Lansdowne Road on Saturday.

Robbie Henshaw and Jacob Stockdale scored a brace of tries apiece but the former was one of two costly injuries - prop Tadhg Furlong the other - to the hosts, landing heavily on his shoulder in his second touchdown and having to have oxygen administered.

Ireland - recording their ninth successive Test victory - face a far tougher challenge in a fortnight at home to Wales.

Italy for their part fought to the end, scoring three second-half tries but slipped to their 14th successive Six Nations defeat, equalling their previous worst run in the tournament.

Ireland made their intent clear early on as Johnny Sexton went for touch instead of the posts, but the Italians managed to hold Conor Murray up as he crossed the line.

However, there was nothing the Italian defence could do to prevent Henshaw going over from a few metres out for his third Test try - Sexton converting for 7-0.

Three minutes later and Jack Conan marked his first Six Nations start with a lovely offload to Murray who was given a free run to the line for his 11th Test try - Sexton converted superbly from the touchline to give the Irish a 14-0 lead after quarter of an hour.

The Italians were left shell-shocked when Bundee Aki crashed over to mark the 27-year-old New Zealand-born centre's first try for his adopted country leaving the Irish just one try short of their bonus point aim with only 20 minutes gone.

Aki then turned creator as he made a terrific break to set up Keith Earls to go over to seal the bonus point and Sexton converted to send the Irish in 28-0 up at the break.

Henshaw added his second try early in the second-half but landed in obvious agony on his shoulder, his leg beating against the ground through pain. But that opened the way for the much-anticipated Test debut of 20-year-old Jordan Larmour.

Sexton converted for the fifth time but alongside man of the match Murray was withdrawn on 50 minutes.

That didn't stop the onslaught as Rory Best went over and Joey Carbery added the conversion.

However, with the game long gone the Italians found some spark and Tommaso Castello got the better of Dan Leavy to release Tommaso Allan with the fly-half going over and converting his try to put Italy on the scoreboard with just over 20 minutes to go.

The Irish, though, went over for another touchdown as Stockdale came in from his wing and took Carbery's pass to score.

The visitors struck back with a second try as old warhorse Sergio Parisse's pass was eventually gathered by Edoardo Gori, who went over.

Stockdale then scored a superb solo try, outstripping Jayden Hayward to touch down in the corner.

The visitors at least had the last laugh in terms of scoring as fullback Matteo Minozzi rounded off a move in the corner.

We live in a world where facts and fiction get blurred
In times of uncertainty you need journalism you can trust. For only R75 per month, you have access to a world of in-depth analyses, investigative journalism, top opinions and a range of features. Journalism strengthens democracy. Invest in the future today.
Subscribe to News24
Related Links
Wales lose Halfpenny for England clash
France go back to Beauxis in bid to subdue Scots
Marx says he needs to work even harder
Next on Sport24
Scottish flanker Watson voted 'Player of the Six Nations'