England aiming to end off strong

Cape Town - England wants to 'finish off' their Six Nations campaign by completing a Grand Slam when they face France on Saturday in Paris.

Victory over France on Saturday will see them seal their first Grand Slam since 2003.

“The big message for us this week is to finish it off but we’re approaching it as we would any other game and the boys are ready to go,” Billy Vunipola told the England Rugby website.

“We’ve still got one more game to go, I think after the game we might realise we’ve done something special but for now we’re just concentrating on our job and moving forward. It’s about improving again from last weekend and always trying to get better.”

Vunipola has made the most carries in the tournament so far with 75 and was awarded man-of-the-match against Scotland in round one and Ireland in round three.

“I feel alright, I’ve actually played less in the last eight weeks than I would normally, the clubs have played eight games and we’ve only played five so I’m feeling good,” he said.

The 126kg back row was appointed vice captain by Jones and he has enjoyed the added freedom and responsibility given to him.

After being asked if he was talking more to the players, Vunipola said: “No not really, I think for me it’s important that what I do say I back it up, so I tend not to try and talk too much.

“I don’t really talk to those that are older than me and tell them what to do, I try and show people and I think Maro (Itoje) is a great example of that at the weekend.

“He did a lot of his talking through his actions and I guess people just followed him.”

Jones’ men set a target before the start of the tournament to win all five games in the RBS 6 Nations and Vunipola believes the squad are still focused on the task.

“It was important for us to draw a line under it and get into France straight away and focus on our next game and that’s been a key area of the mentality we’ve had all Six Nations.”

We live in a world where facts and fiction get blurred
In times of uncertainty you need journalism you can trust. For only R75 per month, you have access to a world of in-depth analyses, investigative journalism, top opinions and a range of features. Journalism strengthens democracy. Invest in the future today.
Subscribe to News24
Related Links
Grant gets first start for Force
Marais expects big night from Smit
Villager cancels traditional Hamilton pre-season derby
Next on Sport24
Sexton believes Ireland can pass French exam and win Six Nations 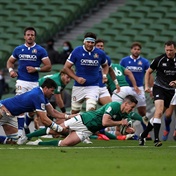