Farrell presents England with Six Nations trophy back at base England huddle after the 2020 Guinness Six Nations match between Italy and England at Olimpico Stadium on October 31, 2020 in Rome, Italy. Sporting stadiums around Italy remain under strict restrictions due to the Coronavirus Pandemic as Government social distancing laws prohibit fans inside venues resulting in games being played behind closed doors. (Photo by Paolo Bruno/Getty Images)

England captain Owen Farrell turned into a master of ceremonies as he presented his team-mates with their Six Nations Championship winners medals on Sunday.

A 34-5 win away to Italy on Rome on Saturday saw England crowned champions but they had to wait for the conclusion of the day's final match, between title rivals France and Ireland in Paris, to know they had won the Championship for the first time since 2017.

As a result, it was not until they returned to their Teddington training base in London on Sunday that England received the trophy.

"It was fantastic," England coach Eddie Jones told a conference call on Sunday.

"Obviously it's not the same, everything is a bit different now. The players walked to the stage, there were fireworks," he added.

"Owen got to be (World Rugby chairman) Bill Beaumont and put the medals around the players' necks! All the paper goes off and the fireworks go off. The players enjoy that solitary moment and then we're back to business."

England's victory in Rome came almost a year to the day since their World Cup final defeat by South Africa in Japan.

They then lost their Six Nations opener against France but bounced back before their tournament finale against Italy was delayed by seven months when the Covid-19 outbreak put the Championship on hold.

Jones, however, is already looking ahead to next month's match against Georgia, which launches England's involvement in the new Autumn Nations Cup, a replacement for the traditional end of year tours of Europe by rugby union's southern hemisphere giants.

"We've started well but there's still a fair bit to go, which starts again in two weeks against Georgia but I'm really proud of their (the England players') efforts," said the veteran Australian coach.

"I prepared the team poorly for the French game, which was widely documented, and then their approach to the rest of the tournament has been outstanding.

"They got on with the job, not looked for any sort of excuse, regardless of what's happened, and played good, tough hard rugby, which you have to do to win a Six Nations.

"The Six Nations is probably one of the toughest competitions in the world to win because it's such a competitive, physical contest and you've got to be at your best every game."

We live in a world where facts and fiction get blurred
In times of uncertainty you need journalism you can trust. For only R75 per month, you have access to a world of in-depth analyses, investigative journalism, top opinions and a range of features. Journalism strengthens democracy. Invest in the future today.
Subscribe to News24
Related Links
Dupont, Ntamack leading France's revival under Galthie
Agen to pay the price for 'intolerable' 71-5 thrashing
Montpellier chasing signature of Stormers' strongman Steven Kitshoff - reports
Next on Sport24
Dupont, Ntamack leading France's revival under Galthie 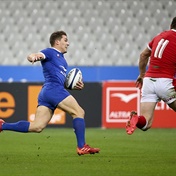