Italian rugby international Maxime Mbanda has earned one of Italy's highest awards for his work as a front-line volunteer in the fight against the coronavirus.

President Sergio Mattarella on Wednesday named the back-row forward a 'Cavalieri al merito della Repubblica', or 'Knights of the Order of Merit of the Italian Republic' for working with a volunteer ambulance team in the city of Parma during the Covid-19 crisis.

"It was unexpected news. This recognition fills me with pride," said Mbanda.

"The credit goes to all the people who have worked hard during this period and who have been doing it for years in silence."

The honour is awarded to those who have distinguished themselves in the service to the community, including doctors and nurses during the recent crisis which killed over 33,500 people in Italy.

Born in Rome to a Congolese father and Italian mother, Mbanda had been scheduled to face England in the Six Nations for his 21st Italy cap on 14 March when all sport was suspended as the pandemic quickly spread.

Instead, wearing a mask and protective suit, the 27-year-old volunteered as an ambulance driver with the volunteer medical transport group "Croce Gialla" (Yellow Cross) in the region of Emilia-Romagna, one of the areas most affected by the coronavirus.

"When everything was cancelled in rugby, I wondered how I could help, even without medical expertise," Mbanda, who plays for Zebre Rugby, the Parma club, told AFP in March.

He said he found the group, which helped transport patients, medicine and food for the elderly during the crisis.

"I transported more than 100 patients, had gruelling shifts where I had lunch in the evening, because I couldn't take off that suit to avoid the risk of getting infected until I was sanitised," he wrote.

"During the most intense period I cried in the evening, as a way to release what I saw during the day which I wasn't used to," he added

Mbanda's father, a surgeon in Milan, was "also on the front line," he said, adding that, if asked, he would do it all again.

"In fact, I have admitted several times during this period that I regretted not having started earlier and I will advise anyone from now on to try to volunteer," he wrote.

"For me it was an incredible experience." 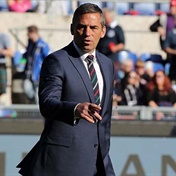