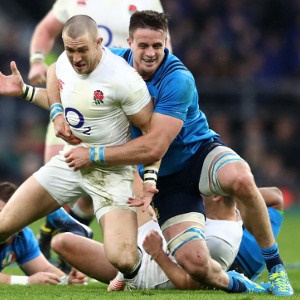 Dublin - Italy's South Africa-born flanker Braam Steyn will start against Ireland in their Six Nations clash in Dublin on Saturday, one of three changes made by head coach Conor O'Shea to the side beaten 46-15 by champions England.

Steyn, 25, replaces Renato Giammarioli and wins his 18th cap for his adopted country, whilst hooker Luca Bigi is in for Leonardo Ghiraldini and prop Nicola Quaglio promoted at the expense of Andrea Lovotti.

However, O'Shea - whose side put up a decent show against England before leaking points in the final quarter - resisted the urge to select fellow Irishman and flyhalf Ian McKinley.

Tommaso Allan retains his place at flyhalf in the starting XV and Carlo Canna is the option on the substitutes bench.

O'Shea said that McKinley, who is blind in his left eye, wouldn't have wanted to be picked simply because it was a good story and a return to not only the country of his birth but also his home province Leinster.

"He was disappointed because he wants to play, that's the bottom line," O'Shea told reporters.

"Ian's a rugby player, he's not a romantic story. Ian wants to be picked because he is the number one rugby player and has the right to be in this team at the time, not because he's a story.

"Sport is full of romance but the hard-nosed side of it is that at the moment, Tommy Allan had the jersey last week and was outstanding, and Carlo Canna is one of the top points scorers in PRO14 rugby and an exciting attacking talent who brings a different skillset.

"I'd love to have picked Ian, I wanted to pick him in so many ways but how could you say to the other players: 'You're not picked because I want to pick Ian on romance'."