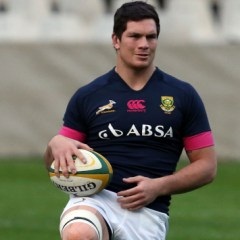 Francois Louw (Getty Images)
Cape Town - Overseas-based Springboks Francois Louw and Ruan Pienaar will be ready for action by the time the Boks play their first game this year.

Flanker Louw, who plays for Bath in England, has recovered from an ankle injury which ruled him out for the last nine weeks. He is expected to play for Bath in their Amlin Challenge Cup final against Northampton Saints at Cardiff Arms Park on Friday.

Scrumhalf Pienaar has also returned to action for his Irish club, Ulster, after being sidelined for four weeks.

His dad, former Springbok Gysie, told the Volksblad website that his son would be ready for selection when the Boks play their first game of the year on June 7.

Bok coach Heyneke Meyer earlier this week announced a 36-man squad to attend a national training camp in Durban from May 25 to 28.

Non-European-based players were not considered due to club commitments but there will be some overseas additions when Meyer names his final squad on May 31, with Louw and Pienaar likely to be called on.

We live in a world where facts and fiction get blurred
In times of uncertainty you need journalism you can trust. For only R75 per month, you have access to a world of in-depth analyses, investigative journalism, top opinions and a range of features. Journalism strengthens democracy. Invest in the future today.
Subscribe to News24
Related Links
Jean lauds Victor, Schalk recall
Next on Sport24
EXCLUSIVE | Oregan Hoskins says SA Rugby rejected own legal advice to suspend Jurie Roux