Why Boks can't beat All Blacks

The Springboks picked up an astonishing 10 yellow cards in 12 games in 2013.

The traditional strength of the Springboks is the physicality of their game and whilst no one expects them to take a step back in this regard, they need to match their physical game with guile and decision-making aptitude and the canny ability to adapt to the referee or the situation.

A yellow card can often change the course of a game and it is these small facets where the Springboks can hope to gain ground on the All Blacks.

The Boks need to improve their discipline. (Gallo Images)

The Springboks in 2013 have improved their squad with the addition of some very exciting players this season with Willie le Roux the biggest success story of the season.

A key difference between the All Blacks and the Springboks is how the All Blacks can field a second-string team and still win in pressure situations and it would be nice to see Heyneke Meyer build a squad instead of just picking the best team available and only dealing with depth if and when an injury happens.

Who is SA's second-best 'fetcher' after Francois Louw? (Gallo Images)

The All Blacks' central contracting allowed them to rest key players during the 2013 Super Rugby season.

Captain Richie McCaw was rested during the 2013 Super Rugby season, similarly, Dan Carter will be rested in 2014.

There is a persistence in SA both at franchise and national level to play the best XV until suspension or injury intervenes and forces change.

Injuries to Jannie du Plessis and Eben Etzebeth during the current season are prime examples of players being played into the ground.

Despite key All Blacks being given proper rest periods during Super Rugby and their workload being limited, a New Zealand team, the Chiefs, still won the competition, proving that a team can practice player rotation and still win.

In 2009, the All Blacks failed to beat the Springboks in three attempts.

The Springboks had managed to beat them based on a superior tactical kicking game, the rolling maul and by bullying them at the lineout.

The All Blacks held a national coaching summit to determine how they could improve in these key aspects of their game and the Springboks have failed to dominate them ever since.

Despite being the best team in the world the All Blacks have not been complacent and continue to improve.

Areas of play the Springboks struggled with against the All Blacks in 2013: securing their own lineout ball, fielding restarts, and competing under the high ball, areas they must show a marked improvement in if they are to defeat the All Blacks.

The Springboks need to overcome their inferiority complex against the All Blacks. The truth is out of Heyneke Meyer's four matches in charge of the Springboks against the All Blacks, only one match (Soweto in 2012 where the Boks lost 32-16) has been a one-sided affair, all the other matches between the two teams were matches that the Boks were in a position to win - but failed to take their chances.

England's 38-21 victory over the All Blacks in 2012, and narrow victories over France and Ireland in 2013, proved that this All Blacks team is not invincible, despite their unbeaten record in 2013.

But the Springboks must overcome their mental hoodoo against the All Blacks in 2014 if they don't want to cede a significant psychological advantage to the All Blacks heading into a Rugby World Cup year in 2015.

The Boks need to overcome their fear of the All Blacks. (Gallo Images)

HAVE YOUR SAY: Why do you think the Springboks are struggling to break their All Blacks hoodoo? Send your thoughts to Sport24 to be published on our MySport24 page or join the debate on Sport24's forum.

Related Links
SA slam unruly All Blacks fans
Kings must play Currie Cup!
Share
Next on Sport24
May be unsafe for Springboks to play, warns Erasmus 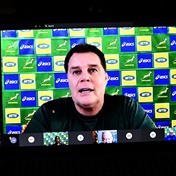