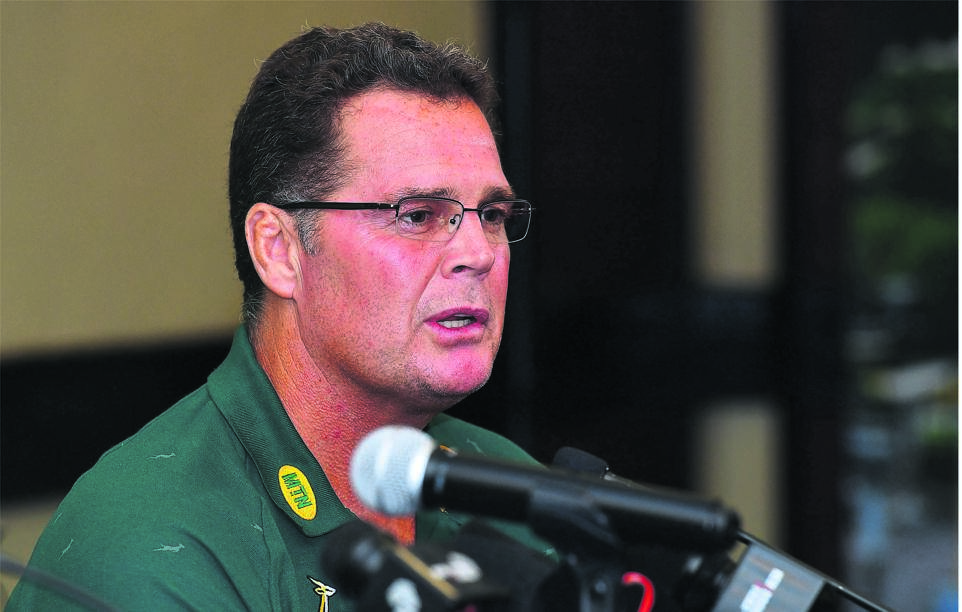 SA Rugby’s director of rugby Rassie Erasmus remains in isolation and will continue to work remotely due to a pre-existing health condition.PHOTO: GETTY IMAGES

The Springboks' memorable 2019 Rugby World Cup victory continue to inspire South Africans and although the Boks were unable to play any Test rugby this year because of the Covid-19 pandemic, South Africans are in for a bumper 2021 rugby year, according to SA Rugby president Mark Alexander.

Monday (2 November) marks the one-year anniversary of the Springboks' memorable 32-12 victory over England in Yokohama, where Siya Kolisi and this Bok colleagues became the third Springbok team to lift the coveted Webb Ellis Cup.

The victory in Tokyo capped a memorable year for the Springboks, who were also crowned as the 2019 Rugby Championship winners, while the South African rugby team was also awarded with the prestigious 2019 Laureus Team of the Year Award in Monaco.

Alexander praised director of rugby Rassie Erasmus, his coaching staff and the entire squad for the amount of joy they brought to the people of South Africa by bringing the RWC trophy home.

"That magnificent victory once more showed that sport can be a great tool for social cohesion in our country," Alexander said via a press statement.

"The past year was obviously a difficult year because of the pandemic, but next year we are in for a bumper rugby year when the Boks will play against the best of the UK and Ireland.

"I have no doubt they will continue to make this nation very proud with their performances on the field. On behalf of the South African rugby fraternity, I want to say once more thank you to the Springboks for inspiring so many of our people."

Erasmus said every member of the squad that went to Japan deserves tremendous credit for their wonderful achievement.

"It was a full-on team effort, from players to coaches and management staff - they all worked incredibly hard and made many sacrifices to make that success a reality," said Erasmus.

Erasmus said that looking back one year later, he is still amazed at the huge impact the victory had on all South Africans.

"It's astonishing, really. I will never forget the amazing welcome scenes at the airport, or the many thousands of people that came out to share in the team's joy during the victory parades.

"And, one year later, people still say how they enjoyed the win and how proud they are of that achievement," added Erasmus.

???? The Boks are still inspiring SA - one year after that memorable day in Japan
??? “I have no doubt they will continue to make this nation very proud"
?? Full story here: https://t.co/x21E3kSNtB#StrongerTogether #ChasingTheSun pic.twitter.com/uZuJnYPyQ1

We live in a world where facts and fiction get blurred
In times of uncertainty you need journalism you can trust. For only R75 per month, you have access to a world of in-depth analyses, investigative journalism, top opinions and a range of features. Journalism strengthens democracy. Invest in the future today.
Subscribe to News24
Related Links
Sharks get their attack going at last post-lockdown
Rassie breaks down in tears recalling Mapimpi's tough upbringing
SA Rugby boss warns unions over 'too white' teams
Next on Sport24
Why Elton Jantjies was an unused Springbok substitute: 'We wanted to get him on'

Choose your newsletters
Voting Booth
With the Springboks losing their last two matches against Australia, how concerned are you?
Please select an option Oops! Something went wrong, please try again later.
Very concerned! Something is not right ...
58% - 3207 votes
I'm not worried. Every team has a bad game. The Boks will bounce back.
18% - 965 votes
It's too early to tell. Let's see how they go against the All Blacks.
24% - 1314 votes
Previous Results
Showmax
Stream SuperSport United vs Kaizer Chiefs