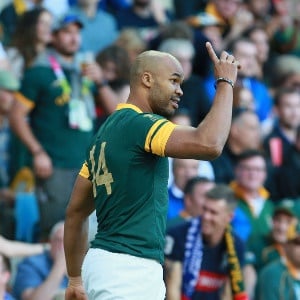 Cape Town – JP Pietersen’s relative personal nightmare at Twickenham may just prove to have bolted the door on his once illustrious Test career.

The tall, big-striding wing was the major “fall guy” when Springbok coach Allister Coetzee named his match-day 23 on Thursday for the match against Italy in Florence this weekend.

From a start against England last Saturday – his 65th in that capacity, and 70th cap overall – Pietersen has tumbled entirely out of the mix for this Test, clearly playing a heavy price for his badly out-of-sorts showing in the 37-21 reverse to England.

He is replaced by another veteran, the fit-again Bryan Habana, on the left wing in one of two changed to the XV from London; the other is more enforced, with Pieter-Steph du Toit returning to the second row from flank in place of concussion-affected Eben Etzebeth and Nizaam Carr earning a first-time start on the side of the scrum.

Pietersen scored lowest of all the Boks on the Sport24 performance card at “Twickers”, earning 3.5/10 for a strangely indecisive effort both in limited attacking opportunities, but more specifically when asked to backtrack under defensive pressure.

It was his fumble of a high ball that turned over possession from a promising position for the Boks, at a time when they were right in the contest at only 10-9 down in the 36th minute, and saw Courtney Lawes score a converted try at the other end of the park.

That put the Boks a little demoralizingly out of range on the scoreboard with halftime looming, and they never recovered from that rather unnecessary seven-point concession.

Considering that Coetzee overlooked Pietersen for the duration of the Rugby Championship after fielding him in the June series against Ireland, this is a second occasion in which he has effectively been deemed surplus to the coach’s requirements in a troubled season for the Boks collectively.

It hardly suggests that the former Sharks stalwart, who now plies his trade in the English Premiership with Leicester Tigers, is still a critical component of the Bok plans.

When he opted not to use him in the all-southern hemisphere competition, Coetzee said he felt Pietersen could benefit from a pre-season conditioning phase at his club, given that for several years the player has often virtually sacrificed off-seasons; he used to play in Japan and then quickly shift into Super Rugby mode for the Durban franchise.

But Twickenham did very little to suggest any fresh zest in the 30-year-old, even if he could yet have two or three good years at the highest level if he manages to recapture his premier, sometimes lethally game-breaking form.

In truth, it has been a few years since Pietersen delivered consistently compelling games for the Boks, and this marginalisation for the Italy fixture could also mean -- if the national side finally “clicks” against limited foes -- that he plays no role in the tour- and year-ending match against Wales, either.

It is probably a little galling to him that he couldn’t even crack the bench in Florence, bearing in mind that he offers utility possibilities, not just as a wing on either side but also as an outside centre or even fullback.

Pietersen actually started his Bok career as their designated fullback, wearing No 15 against Australia at Ellis Park in 2006, a match won 24-16, before he overwhelmingly operated at wing in the years that followed.

He is one of a dwindling group of still-active – especially in a Bok-availability sense – players from the glory days of 2007, when he contributed fulsomely to the World Cup triumph under Jake White’s charge.

Apart from his replacement for this Test, Habana, the Du Plessis brothers (Bismarck and Jannie) and sometimes rebellious Frans Steyn are the only others from the triumphant class of 2007 still just about on the green-and-gold radar.

Next season, the younger likes of Jamba Ulengo, Travis Ismaiel and Leolin Zas may press even more strongly than this year for Test recognition in wing slots, especially with a view to fresh faces coming into the mix in time to be suitably street-wise for RWC 2019.

Pietersen remains too much of a talent to summarily write off.

Related Links
Cobras loan Ramela to Highveld Lions
Warburton back for Wales
Habana returns, Carr starts for Boks
Share
Next on Sport24
Aphiwe Dyantyi Exclusive Part 2: 'I get asked, are you coming back?'