Sport24 asked: How would you sum up your 16-year journey in the oval-shaped game?

Bryan Habana: The journey has been unbelievable from start to finish. It has been great to do something I love and live out my dreams for an extended period of time. I was very fortunate to achieve some great accolades over my career and to have been part of some amazing sides. I played with legends of the game both in South Africa and France. I experienced the highs and the lows, and am immensely grateful for the fantastic memories I take with me into the next chapter. I felt as though I still had quite a bit to contribute at Toulon, which is why I signed a one-year contract extension in 2017 (Habana joined Toulon in 2013 from the Stormers on a three-year contract). However, my injury and subsequent operation put a spanner in the works and set me back a bit. I would have loved to have got back on the field one last time before hanging up my boots but in life we don’t get to write our own scripts. I, like most players, would have desired my career to have ended differently but sometimes things don’t turn out quite the way we hope for. It is what it is. I don’t hold any regrets and certainly gave it my very best to try and get back on the field and contribute to Toulon this season. Unfortunately, it didn’t pan out that way and you have to roll with the punches. Mentally, I have learnt a lot about myself over the past eight months. Trying to get back on the field and not being selected has been frustrating but I have learnt life doesn’t always give you what you hope for. It’s how you react to setbacks that prove what type of person you are.

Sport24 asked: Did you consider extending your playing career somewhere else?

Bryan Habana: There was a search for different options and I considered opportunities in Japan and the UK. I thought of maybe giving it one last go and having a final crack somewhere else. However, my wife, Janine, and I weighed up all the options and it wouldn’t have been fair to move our young family halfway across the world for around six months. I knew that life after rugby was going to happen at some point and I didn’t want to delay the inevitable. I will now enjoy some quality time with the family, give myself some space to reflect and then weigh up all my post-rugby options. I will plan properly for what is to come because a rugby career is very short in comparison to the rest of your life. Taking everything into consideration, I felt it was time to step away from the game... It’s not really for me to assess from an achievement point of view what exactly I did over my career but I am grateful I got an extended opportunity to do what I love. And hopefully, in so doing, I made a sport worth watching and gave people enjoyment. Hopefully I have inspired and allowed youngsters to dream as big as they possibly can so that they can one day wear that Springbok jumper as well. I definitely don’t think I’m up there with the likes of Jonah Lomu, Jonny Wilkinson, Richie McCaw and John Smit but hopefully I have played my part in leaving the green and gold jersey in a better place than what I received it. However, it’s not for me to say whether or not I can be called a rugby legend.

Sport24 asked: How would you assess the current state of South African rugby?

Bryan Habana: If I had the answer as to why a South African side hasn’t won Super Rugby since 2010, I think I would be a very wealthy man. Over the last couple of years, the Lions have definitely laid down a marker in terms of reaching back-to-back Super Rugby finals. Unfortunately, they haven’t gone all the way but they have definitely shown their class and what they are capable of. I definitely think the Lions are the full-on favourites to hold the South African flag as high as possible leading into the latter stages of the Super Rugby competition. It has been fairly challenging for South African teams in the last few years but there is definitely potential for South African sides to show that they have what it takes to compete with the best from New Zealand and Australia. I definitely feel there is enough talent in South Africa to have a very competitive Springbok side. Going forward, it’s imperative that the correct structures are put in place and that everyone has a common understanding. Everyone heading in the same direction is critically important for the well-being of SA rugby. At the end of the day, Springbok rugby is the most important asset. As a former player and proud South African, I would certainly like to see the Springboks get back up to being competitive with the top teams in the world. There needs to be an understanding from everyone within South African rugby that the Springbok team is the most important factor. The unions must understand that SA rugby needs to be maintained in the highest esteem. Everyone wants to see the best Springbok team out on the field each and every Saturday. The best players need to be given the opportunity to play for the Springboks whether they are black, white, coloured or Indian. You want to see everyone having a fair and equal opportunity. In terms of transformation, it’s a unique situation that no other Test-playing nation in the world has to deal with. Hopefully the charters and directives are put in place with the understanding that it’s for the better of South Africa and SA rugby... I have no regrets in terms of my Springbok career (Habana earned 124 caps and scored 67 tries). In 2016, I really believed I could play my part and assist in smoothing the transition, post-2015 Rugby World Cup, for the new players that came into the Test arena. I was bitterly disappointed that I wasn’t able to contribute as much as I would have liked in terms of on the field. We suffered a first-ever loss to Italy in what would be my last Test. I gave as much as I could but unfortunately it wasn’t enough at that moment in time. It was pretty tough all round for SA rugby during Allister Coetzee’s two-year tenure results-wise but he put his best foot forward and tried to ensure transformation targets were met. It’s fantastic to see there is an improvement in that regard because everyone deserves to go and show their worth and prove they are talented enough to play for the Springboks.

Sport24 asked: What are you expecting from the South Africa-England Test series?

Bryan Habana: I can’t wait to sit on the couch as a proud supporter and watch how the Springboks do against a fairly inexperienced England side in June. (Eddie Jones has named seven uncapped players in his 34-man squad, with Danny Cipriani earning a recall). Hopefully the Boks can go out and show their value and talent on the Test stage. Rassie Erasmus has a fantastic rugby brain on him and he would have done plenty of planning. Meanwhile, having worked with Eddie during the 2007 Rugby World Cup, he will also be precise in terms of his planning and detailed in what he wants to achieve. He will be coming up against a Springbok side that is experiencing a new chapter. It’s not going to be an easy first Test series for the Springboks under Rassie but it’s now an opportunity for a new breed of Springboks to start coming through. England has quite a big injury list, with a host of experienced players who aren’t available to tour, and Eddie will give some youngsters an opportunity to gain international experience. However, knowing how competitive Eddie is, he is not going to be taking this tour lightly. Even though he might be giving a few players that have been on the edges of selection an opportunity to play, there will definitely be a massive sense of urgency and drive to beat the Springboks in South Africa. (England has only won 23 percent of their matches against the Springboks in South Africa, with their last victory coming in Bloemfontein back in 2000).

Sport24 asked: Would Siya Kolisi get your vote to become the Boks’ 60th captain?

Bryan Habana: I definitely believe there is enough leadership ability within Siya’s skillset for him to become a future Springbok captain. I got to know Siya when I joined the Stormers from the Bulls in 2010. At the time, he was a youngster and went on to make his Super Rugby debut in 2012. Fast forward to 2018 and I was so proud to see him earn his 100th Super Rugby cap. As we saw this past weekend against the Bulls, Siya is not only inspirational to the Newlands faithful but to many a youngster of any colour in South Africa. It’s really good to see his growth and development - not only as a player but as a leader of men. Last year, he showed his true colours for the Stormers and was a standout performer for the Springboks. Bar being the Springbok coach, the Springbok captaincy is one of the most difficult jobs in the world owing to the microscopic scrutiny you are under every time you pull that jersey over your head. Siya or whoever becomes the next Springbok captain, going into the June series and with an eye on the 2019 World Cup, needs to understand that their own uniqueness has to be laid out there for everyone to understand. They have to lead and inspire. As Springbok captain, the key is to set a standard so that the youngsters coming into the national team fold fully understand what it means to be a Bok. The Springbok captains that will go down as greats ensured that their unique abilities shone through and they always put the team first.

Sport24 asked: What is your take on South Africa’s options when it comes to wing?

Bryan Habana: The youngsters playing for the Lions (Aphiwe Dyantyi and Madosh Tambwe) have been really fantastic this season from what I have seen, as has the Sharks’ Sbu Nkosi. Obviously the likes of myself and JP Pietersen, who have taken the wing spots for the last number of years, are no longer there and it’s a new dawn for Springbok rugby. It’s really great to see the aforementioned youngsters doing really well in Super Rugby. The most recent Springbok wingers - Raymond Rhule and Dillyn Leyds - will have their say but there are plenty of opportunities for talent coming through in South Africa to stake a claim for higher honours, which is exciting. It’s ultimately about nurturing that talent to ensure they stay on the team and play an adequate level of rugby for a prolonged period of time... The role of the modern day winger has certainly changed. It’s not about standing on the wing anymore and collecting that last pass and diving over to score the try. The work-rate of wingers in today’s game is imperative and the proficiency under the high ball is incredibly important. It’s a complete skillset that you need on both attack and defence, which makes you very dangerous.

Rohan Janse van Rensburg
Related Links
SA Rugby scraps rule on overseas Boks
5 possible Springbok hookers for June Tests
Jones warns Cipriani to behave himself in SA
Share
Next on Sport24
Chiliboy Ralepelle: 'This is no longer about me' 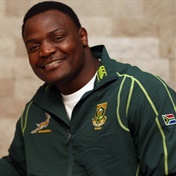