Home flyhalf Joel Stransky's 30m drop goal in the second period of extra-time will go down as arguably the most famous kick in Springbok rugby history.

After the Springboks won possession at scrum time, Stransky kicked the winning drop when he received a pass from scrumhalf Joost van der Westhuizen.

It was later revealed that Stransky had opted to cancel the initial planned move when he saw a gap for a drop goal.

Van der Westhuizen recalled in later years that his opposite number, Graeme Bachop, made a crucial error in trying to disrupt his pass instead of covering Stransky, which left a gap for the Bok pivot to execute and hand his side a 15-12 advantage.

Not that it mattered much, but many fans seem to forget the fact that Stransky had the chance to take the Boks out to a six-point lead shortly before the end but missed a relatively easy penalty shot at goal.

There were no tries awarded in the 1995 final, but Springbok flank Ruben Kruger had every right to feel aggrieved after scoring what appeared a legitimate try in the first half.

The powerful Bok scrum had the All Blacks under pressure and Kruger went over the tryline after a 'pick and go', only for English referee Ed Morrison to determine he was held up.

In later years, Morrison conceded that Kruger in all likelihood did score.

"Nobody said anything, because they won!" Morrison chuckled in 2015 during an interview marking the 20-year anniversary of the game.

As the match neared the 100-minute mark, the All Blacks appeared out on their feet.

The hosts spent most of the second period of extra time camped inside New Zealand territory and towards the end it was evident that the fittest team had prevailed.

Lomu stopped in his tracks

Giant All Blacks wing Jonah Lomu was the talk of the tournament, and after scoring four tries in New Zealand's semi-final annihilation of England at Newlands, pundits were questioning whether the Springboks would be able to stop him in his tracks.

But the hosts' upset victory was built on a staunch defensive effort and Lomu could find no way through.

Scrumhalf Van der Westhuizen's low tackle on Lomu, after the left winger had pierced through the Bok midfield seemingly on his way to the tryline, was an early standout.

Late in the second half, centre Japie Mulder also saved the day when he went low on Lomu to bundle the big winger into touch after he went around fullback Andre Joubert.

Springbok right wing James Small also did a remarkable job covering Lomu and could be forgiven for being forced off with cramp late in the contest after clinging on for dear life on his bigger opponent.

Former President Nelson Mandela made headlines when he attended the match wearing a No 6 Springbok jersey - similar to the one worn by South African captain Francois Pienaar.

Pienaar afterwards admitted he was taken aback by Mandela's gesture and the image of the President handing over the Webb Ellis Cup to the victorious skipper has become part of SA sporting folklore.

In his post-match speech, Pienaar drew large cheers when he responded with the inspirational words "not for 60 000 but for 43 million South Africans". 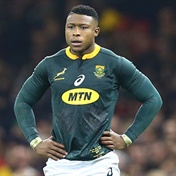