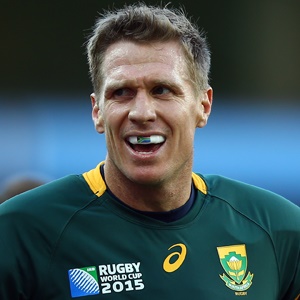 Cape Town - The end of the road is near for former Springbok captain Jean de Villiers.

Currently with English Premiership club Leicester Tigers, De Villiers is likely to miss the remainder of the season with a knee injury.

Speaking to Darren Scott on BallzRadio this week, De Villiers confirmed that while he wanted to get back onto the field as soon as possible it was "not looking good."

The 35-year-old confirmed that retirement at the end of the season was likely and that he would return back to South Africa where he had a couple of opportunities lined up.

De Villiers is expected to get into broadcasting.

"It has been very frustrating from a playing point of view. I’ve been injured most of the time," De Villiers said of his stay at Leicester.

"Initially it was a bit of a medical mishap that caused me to be out for two months. Then I was back for two matches and my knee just swelled up after the second game for no reason whatsoever and I struggled to get back since.

"At the moment they can’t tell me what’s wrong with the knee … they can’t pick up anything. But there is substantial pain, so it’s frustrating not to know exactly what it is."

"I’ve played rugby much longer than most guys. I’m 35 and I’ve experienced a lot and I’ve had some really good times on the rugby field."