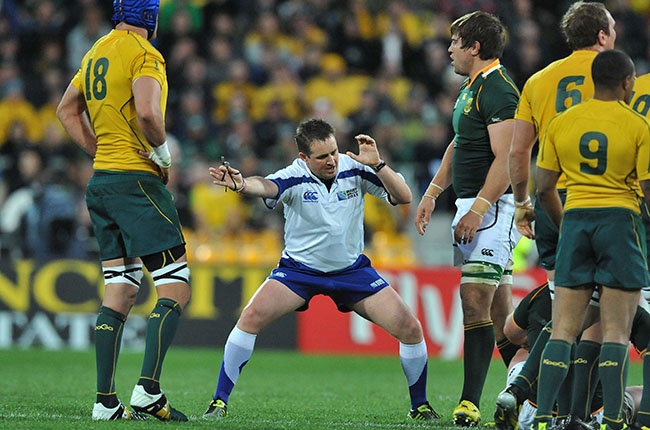 The Wallabies beat the Springboks 11-9 in the 2011 Rugby World Cup quarter-finals, but the match in Wellington was best remembered for Lawrence's officiating.

Or as some would describe it, his lack of officiating.

The Springboks enjoyed three-quarters of possession but their flow was constantly disrupted by Australian flank David Pocock, who had a field day at the breakdown.

Lawrence let several transgressions go unpunished and the aftermath of his performance proved to be the end of his refereeing career.

"He was considered to be in the top four or five referees in the world. He was given the plum quarter-final and didn't put his best foot forward," Kaplan told Sport24 as part of a wide-ranging exclusive interview.

Kaplan, though, stressed that he didn't think Lawrence deliberately went out to eliminate South Africa from the tournament, which was eventually won by hosts New Zealand.

"I think he froze. I don't subscribe to all this other nonsense. I think he froze on the big occasion and in actual fact, he didn't make decision, which was his undoing. It wasn't that he made so many bad decisions, I mean he did make some, but we all do. But I think he was almost... I wouldn't say too frightened... but he was trying to do something that wasn't in line with his profile.

"There were only 10 penalties in the game, there was a lot of stuff that was happening around those rucks and it was an unfortunate ending. I am not on that bandwagon, Bryce was a colleague at the time, and I'd have no problem having a few beers with him, even though I don't think he did well in that game. I think by his own admission, there are some things that he didn't do well.'

Kaplan though agreed that Lawrence's performance affected the outcome.

"Absolutely. But does he deserve to have never refereed a Test match after that? That's a question that the public would love to know. In October of 2011, he was considered in the top few referees in the world, voted on by a selection panel. Then he referees this game and he is not up to his usual performance and he never refs again. I know it wasn't by his own doing, that I can tell you for sure. So I am just asking the questions. Can someone slip from say number four in the world to zero because of one bad Test match? There are people that will say yes, absolutely but I just find it a bit odd."

ALSO READ | Andre Watson: Bryce was out of line

Related Links
Tim Swiel on why a move north could be a good option for SA Rugby
Will NZ version simply mirror broader Super Rugby?
Pat Lambie: Curwin Bosch has shaken the defence label
Share
Next on Sport24
Siya Kolisi confirms autobiography: 'There are many parts of my story untold'