Kriel ruled out of second Test

Cape Town - Injury has officially ruled Jesse Kriel out of the second Test against France taking place in Durban on Saturday.

Springbok team doctor, Dr Konrad von Hagen, confirmed on Monday that Jesse Kriel will not be available for selection due to concussion and that he will continue with his gradual return to play protocol after taking a blow to the head in the second-half at Loftus on Saturday.

“It is important to note that we practice extreme caution with head injuries and there are definite protocols in place for on-field and off-field diagnosis and subsequent management,” explained Von Hagen.

Damian de Allende also returned to Cape Town to continue with his injury rehabilitation. His place in the squad is taken by Cheetahs centre, Francois Venter.

There was some good news for the Springboks on the injury front, however.

Lionel Mapoe has completed the final phase of his rehabilitation for his hamstring strain and resumed with full training on Monday.

Von Hagen confirmed that the he rest of the Bok squad were all in good shape and in the frame for selection for Saturday. 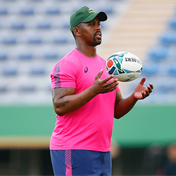