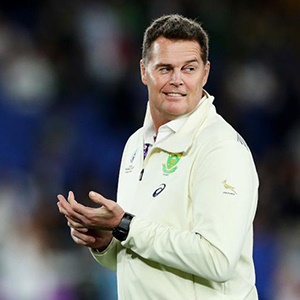 The success of Springbok mastermind Rassie Erasmus' kicking-conscious strategy at RWC 2019, despite the criticism it often earned, was carried over into this year's eventually suspended Six Nations competition.

So says Vlok Cilliers, the dual former Springbok and SA Sevens player who is the French national team's kicking consultant up to and including the 2023 World Cup on their soil.

Stellenbosch-based Cilliers, recently returned to South Africa, was with Les Bleus throughout the Six Nations, until a few games at the business end were postponed to undisclosed future dates due to the coronavirus pandemic.

France were level on points with England at the top of the table when the disruption came.

"The teams that were statistically shown to have kicked the most - tactically - in the competition were also first and second on the table; it's quite interesting and revealing," Cilliers told Sport24.

"It was further confirmation that a strong, well-organised kicking game in modern rugby is just not negotiable.

"Look, European teams will always kick a lot anyway because of conditions in their winter, but I definitely think Rassie and Jacques (Nienaber), as clever coaches, only reinforced that characteristic as the Boks won the latest World Cup.

"There was plentiful criticism of the Boks for kicking too much last year, with Faf (De Klerk, at scrumhalf) used a lot for box kicks, but they still scored plenty of tries, don't forget.

"Wherever we went in the last few weeks (with France), I heard praise for Rassie's methods, and it would have reinforced many teams' strategies in the Six Nations."

Cilliers added: "You just have to strike the right balance between your kicking game and your attack ... and they can be the same thing a lot of the time. It's all about getting into the right areas. A smart kicking strategy actually creates attacks.

"You can get a high ball back, the defence is not organised for a change, turn it over, kick in behind ... I have seen a stat from the 2020 Six Nations which shows that no team, in the entire competition until it stopped, had manufactured a try from their own half."

Cilliers said the standard of placekicking was as good as he had expected, competition-wide, in the Six Nations.

"When you have a Farrell, a Sexton, a Halfpenny it will seldom be anything but that.

"That was one of our own head coach Fabien Galthie's concerns ahead of the tournament: to get his place-kickers more consistent. My job was to help gradually get their percentages up ... they were round about 72 percent.

"I said a lot of work would be needed, and not overnight, to get closer to 80-plus where the big teams are. It's a work in progress, and we are edging up."