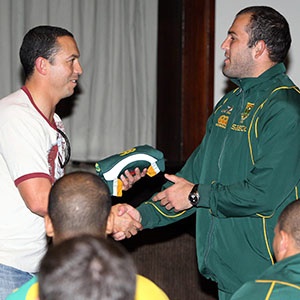 Faf de Klerk currently deserves to occupy the Springbok No 9 jersey, with Herschel Jantjies hot on his heels.

That is the view of former Springbok scrumhalf Werner Swanepoel, who shared his views on the current crop of No 9s in the national setup.

"Faf de Klerk is the incumbent Springbok No 9 and played a huge role in the World Cup success. The overseas stint has done him the world of good and he has played so well. Herschel Jantjies has come through beautifully and is obviously next in line," Swanepoel told Sport24 in an exclusive interview.

'Smiley', as he was known amongst team-mates, also added that he was impressed by young Sharks scrumhalf Sanele Nohamba.

"He is a youngster coming through and I was pleased with what I saw from the couple of games he started. He also made an impact when he came off the bench, so the 21-year-old looks like a real prospect. Embrose Papier had a bit of a dip in form before the World Cup but he's still knocking on the door of national selection. Some players find their feet quicker than others but the talent is definitely there..."

Swanepoel, who played 20 Tests for the Springboks between 1997 and 2000, also noted that Bok legend Fourie du Preez remains the benchmark for any scrumhalf.

"If I had to pick the best No 9 that I have ever seen in my rugby life, it would be Fourie du Preez. Apart from his excellent general play he was a really good kicking scrumhalf. Rassie Erasmus' game plan with De Klerk at the World Cup was also to kick a lot and I always say around braais if Nick Mallett wanted myself and Joost van der Westhuizen to kick like that neither of us would probably have played for the Springboks!" Swanepoel said.

Swanepoel added: "In terms of scrumhalf play, game plans have changed a lot but not necessarily the positions themselves. Since 2004, the game has changed with all the up-and-unders and playing from nine to try and get the ball back. Faf got plenty of stick because his kicks weren't always on the button but the game plan worked well for the Boks in Japan. However, the cliché that a kicker is only as good as his chasers is true."

We live in a world where facts and fiction get blurred
In times of uncertainty you need journalism you can trust. For only R75 per month, you have access to a world of in-depth analyses, investigative journalism, top opinions and a range of features. Journalism strengthens democracy. Invest in the future today.
Subscribe to News24
Related Links
Shock as Bulls CEO steps down
Teichmann: Am captaincy a 'masterstroke' from Sharks
SA Rugby sends best wishes to departing Rugby Australia CEO
Next on Sport24
EXCLUSIVE | Oregan Hoskins says SA Rugby rejected own legal advice to suspend Jurie Roux