The 10 greatest ever Springbok No 10s

Sport24's Herman Mostert picks his 10 greatest flyhalves - in order - to wear the No 10 jersey for the Springboks.

But what do YOU think?

Who was the greatest Springbok to pull the key No 10 jersey over his head?

Let us know your thoughts by mailing us on mysport@sport24.co.za or by tweeting us @Sport24news.

Sadly, his peak years coincided with South Africa's sporting isolation and it reduced his international career to a mere 28 Tests between 1980 and 1992.

But Botha did enough during that time, which included seven Currie Cup wins with Northern Transvaal, to stand out as South Africa's greatest No 10.

However, crucially, Botha should not be remembered as just a kicking flyhalf. It's a wrong perception among many rugby fans.

He played with some terrific outside backs like Danie Gerber, Michael and Carel du Plessis, to name but a few... and those players would not have thrived alongside a flyhalf who just kicked away well-earned possession. Before Botha's arrival, many considered Osler as the best ever No 10 to grace a rugby field in South Africa.

The Western Province pivot, who played 17 Tests between 1924 and 1933, was regarded as the country's first real star flyhalf.

The former Springbok captain was known as a master of tactical kicking, but there was far more to his game than just kicking. He had lightning speed off the mark which enabled him to create several scoring opportunities for his outside backs.

In his 1970 book The Springboks, renowned Cape-based rugby writer AC Parker dedicated a whole chapter to Osler and capped the period between 1924 and 1933 as 'The Bennie Osler Era'.

Parker wrote that Osler was "the greatest individual match-winner and tactical kicker that South African rugby has produced" and called him "The Great Dictator". For me, the 2019 Rugby World Cup winner is South Africa's most complete flyhalf of the professional era.

Pollard's calm demeanour was vital in last year's World Cup win in Japan. Aside from a sound kicking game, his physical presence and ability to attack the gainline sets him apart from other flyhalves.

At only 26, and with his injury woes seemingly a thing of the past, he is sure to add significantly to his current 48-Test cap tally. A brilliant running flyhalf who played in 25 Tests between 1967 and 1971. The Springboks won 18 of those Tests, with four lost and three drawn.

Aside from his running exploits (which can be viewed in a video clip at the bottom of the story), Visagie was no slouch with the boot and also landed five drop goals in Test rugby.

He was instrumental in helping Griquas to their famous 1970 Currie Cup final win when upsetting Northern Transvaal 11-9 in Kimberley. Piet Visagie in his prime in the 1960s (Gallo Images)

Nicknamed 'Lem' due to his ferocious tackling, Honiball was also one of the best attacking flyhalves ever to represent the Springboks.

He was sublime with ball in hand and his running lines provided space for his outside backs. The Sharks hero had the uncanny ability to make those around him look great and never appeared rushed.

If he was a more consistent goal-kicker he would have played more than 35 Tests. 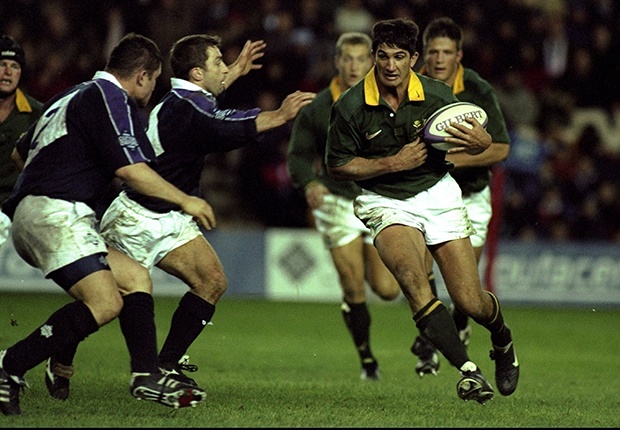 The Natal pivot played 19 Tests between 1960 and 1965 and had a reputation as an attacking genius.

But by the end of his Test career, Oxlee had also become renowned for his goal-kicking exploits.

Oxlee scored two of his then record five tries for a South African flyhalf in the 1960 home series victory over the All Blacks.

He finished his Test career with a points tally of 88, smashing Gerry Brand's record of 55 that stood for 24 years from 1928.

Oxlee was also the first player to rack up a century of caps for Natal.

He died aged 63 in 1998 after complications following a hip replacement. 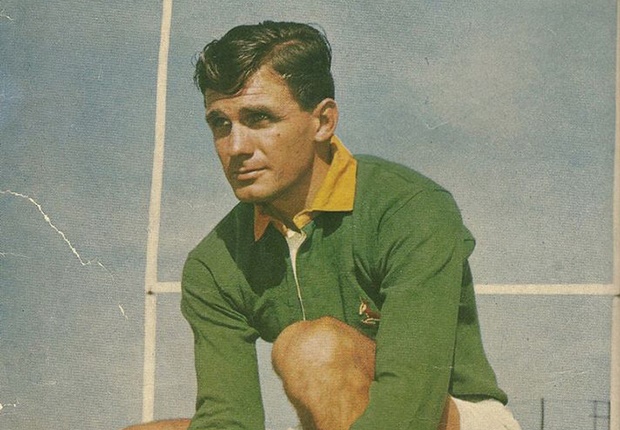 He may not have been the flashiest of flyhalves, but Steyn's big match temperament cannot be questioned.

If I had to pick one player to kick a conversion for my life then I'd pick Steyn. His 60m winning penalty after the hooter to clinch the 2009 series against the British & Irish Lions will forever live on in Springbok folklore.

That year Steyn's boot was also instrumental in the 2009 Tri-Nations win which included three triumphs over the All Blacks.

For those questioning Steyn's ability to get his backline firing, I urge you to go and watch a highlights package of the Bulls' victorious 2009 and 2010 Super Rugby campaigns... He will forever be remembered for kicking the winning drop goal in the 1995 Rugby World Cup final against New Zealand at Ellis Park.

Stransky was a tactically astute player and perhaps underrated as an attacking threat.

The 22-Test-capped pivot had a great skillset and a calm demeanour under pressure. The legendary former Transvaal pivot played nine Tests between 1974 and 1976, but would have played many more in a different era.

Bosch gained international recognition for his deadly boot and his 'around-the-corner' kicking style.

He scored 89 points in those nine Tests and the highlight of his international career was playing in the 3-1 home series victory over the All Blacks in 1976.

The 70-year-old has been living in Brisbane, Australia since the late 1990s and is still the Golden Lions' record points scorer. A player who could kick equally well off both feet, the Northern Transvaal legend had the distinction of never playing in a losing Test for the Springboks.

The highlight of his 10-Test career was the 4-0 series whitewash over the touring All Blacks of 1949.

South African sports journalist RK Stent, in his 1952 book The Fourth Springboks, had an apt description of Brewis: "JD (Hannes) Brewis was the rugby brains of the party and is now established as the best strategist the game has known in South Africa since Bennie Osler”.

We live in a world where facts and fiction get blurred
In times of uncertainty you need journalism you can trust. For only R75 per month, you have access to a world of in-depth analyses, investigative journalism, top opinions and a range of features. Journalism strengthens democracy. Invest in the future today.
Subscribe to News24
Related Links
FLASHBACK | British & Irish Lions, Guscott sink Springboks in 1997
DOWN HEROES' ALLEY | The single-minded Michael du Plessis
Coronavirus the final nail in SA's Super Rugby coffin?
Next on Sport24
Gatland says Springboks could be 'underdone' for Lions tour